Rasa - Palestinian President Mahmoud Abbas has called for an international conference on a new and wider "peace" process in the Middle East to be convened by the middle of 2018. 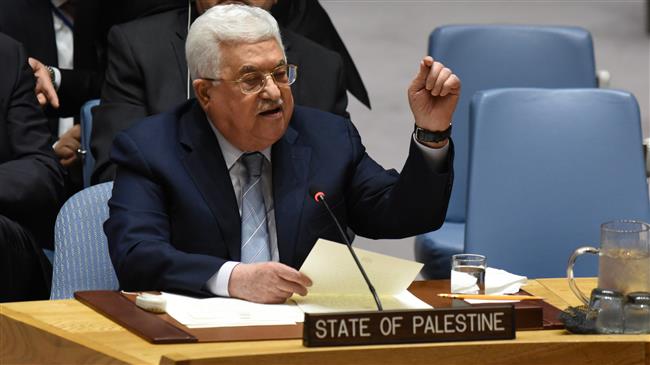 "To solve the Palestine question, it is essential to establish a multilateral international mechanism emanating from an international conference," Abbas told the 15-member council.

He said the Israeli regime was the main factor behind the failure of the so-called peace efforts as it was "acting as a state above the law."

"It has transformed the occupation from a temporary situation as per international law into a situation of permanent settlement colonization," the Palestinian leader added.

Also briefing the Security Council on the situation in the Middle East, Nickolay Mladenov, the UN special coordinator for the so-called Middle East peace process said the international community must continue supporting "substantial Israeli policy changes" on settlements and stressed that "these are not negotiations between equals."

The so-called Israeli-Palestinian peace process has been deadlocked since April 2014.

Palestinians want the resolution of the conflict with Tel Aviv based on the so-called two-state solution along the pre-1967 boundaries.

However, Israeli officials insist on maintaining the occupation of Palestinian territories and press ahead with their settlement activities.

US President Donald Trump on December 6 defied global warnings and said Washington formally recognized Jerusalem al-Quds as the “capital” of Israel and would begin the process of moving its embassy to the occupied city, breaking with decades of American policy. His decision infuriated the Palestinians, who declared that Washington could no longer play a role as lead mediator in the Middle East peace process.

Clashes erupted between Palestinians and Israelis across the occupied territories few hours after the US president's move.

Palestinians in the besieged Gaza Strip staged a demonstration against the US and Israel, condemning Trump's recognition of Jerusalem al-Quds as Israel's capital.

Israel, which often accuses the European Union and the UN of bias against it, is reluctant to accept any other mediator than the United States.

According to Press TV, the European Union in October urged the Israeli regime to stop plans for the construction of new settler units in the occupied West Bank, warning that such moves undermine peace efforts.

"The European Union has requested clarifications from Israeli authorities and conveyed the expectation that they reconsider these decisions, which are detrimental to ongoing efforts towards meaningful peace talks," the European Union's foreign service said in a statement.

However, the Israeli cabinet in late December approved $11 million in funding for settlement activities in the occupied West Bank following a meeting between Prime Minister Benjamin Netanyahu and a group of Zionist rabbis.

Israeli daily Haaretz reported that Netanyahu met with the rabbis in an attempt to gain their support against the backdrop of two corruption investigations that are being conducted against him.

In an interview with Israel Hayom newspaper, Trump said Israel’s illegal settlements in occupied Palestinian territories have "complicated" the so-called peace process and urged "care" over the issue.

The US president also said he did not believe the Israelis, as well as the Palestinians, were ready to make peace.

Tags: Palestinian Israel
Short Link rasanews.ir/201pYg
Share
0
Please type in your comments in English.
The comments that contain insults or libel to individuals, ethnicities, or contradictions with the laws of the country and religious teachings will not be disclosed