Rasa - Hundreds of Bahrainis have staged anti-regime protests across the Persian Gulf kingdom against the Al Khalifah regime’s crackdown on dissent. 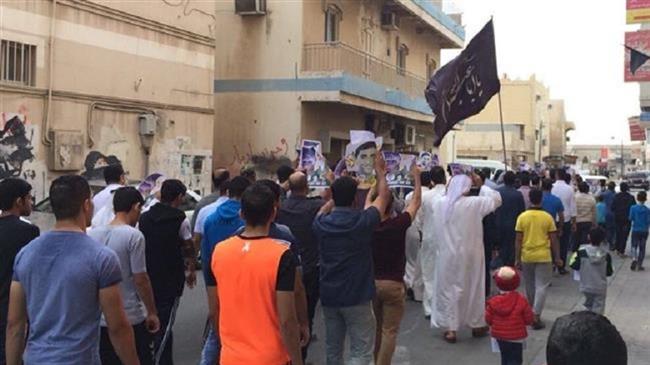 RNA - Protesters held placards and chanted slogans against the Al Khalifah regime and called for immediate release of political prisoners.

The regime forces, however, used tear gas to disperse the crowd in the village of Ma’ameer.

According to Press TV, Sheikh Isa Qassim is now living under house arrest since Manama revoked his citizenship in June 2016, prompting protests and sit-ins in his home-town of Diraz.

The rallies came two days after Bahraini people marked the seventh anniversary of their popular uprising with massive protests across the country. Police used tear gas against the demonstrators in several areas, injuring several of them in the ensuing clashes.

Thousands of anti-regime protesters have held numerous demonstrations in Bahrain on an almost daily basis ever since the uprising began in the capital Manama in mid-February 2011 and snowballed into a full-fledged movement sweeping the whole Shia-dominated country. They demand that the Al Khalifah dynasty relinquish power and let a just system representing all Bahrainis be established based on political reforms and equality.

Scores of people have lost their lives and hundreds of others sustained injuries as a result of the Al Khalifah regime’s crackdown.

Bahrain has also stripped hundreds of its citizens of their nationality, and has jailed dozens of high-profile activists and religious clerics over the past seven years.

Tags: Isa Qassim Al Khalifah bahrain
Short Link rasanews.ir/201pYZ
Share
0
Please type in your comments in English.
The comments that contain insults or libel to individuals, ethnicities, or contradictions with the laws of the country and religious teachings will not be disclosed