Protest in Tunisia Against Normalization With Israeli Occupation

Rasa - Twelve parties, a non-governmental organisation and a Tunisian association demonstrated on Sunday in the centre of the capital, Tunis, after a long stand in front of the statue of Ibn Khaldun, and demanded “Jerusalem is the eternal capital of the State of Palestine.” The protest was organised by the National Coordination Committee for the Criminalization of Normalization with the Israeli Occupation. 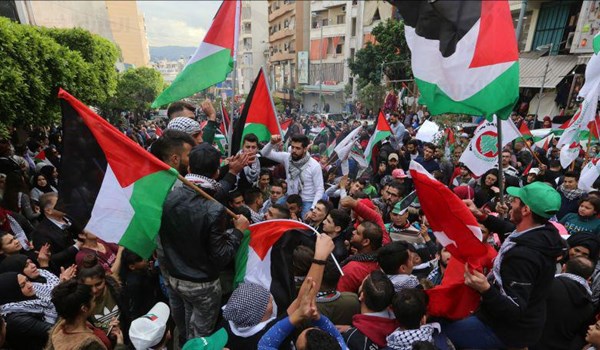 RNA - Citizens from all the governorates in Tunisia have taken part in the march. They raised Palestinian and Tunisian flags and chanted that Jerusalem is the eternal capital of Palestine. They also called for the criminalization of normalization with the occupation, Middle East Monitor reported.

The National Coordination Committee for the Criminalization of Normalization with the Israeli Occupation held its first meeting earlier this month, in the presence of representatives of Tunisian parties and NGOs in order to further establish the reality of belonging to Tunisia, Palestine, and Jerusalem.

According to Fars News Agancy, they also called for the criminalization of normalization through a law which is expected to be voted on in the Tunisian People’s Assembly on the 20th of this month.

A statement issued by the meeting stressed that “Zionism represents a threat to Tunisia, and that the Zionist movement is aimed at controlling all the Arab countries within the new Middle East regime.”

The statement added that the enactment of the law which criminalizes normalization will strongly support Palestine, its people, and its cause; the Palestinian people who sacrificed with thousands of martyrs and thousands of wounded and detainees.

The statement also reminded of the Palestinian people’s sacrifices in order to defend them.

Tags: Tunisia Israel
Short Link rasanews.ir/201pYD
Share
0
Please type in your comments in English.
The comments that contain insults or libel to individuals, ethnicities, or contradictions with the laws of the country and religious teachings will not be disclosed