'Saudis waging war on Yemen on behalf of US'

Rasa - Saudi Arabia continues its war of attrition and aggression against its southern Arab neighbor Yemen. In a fresh round of aerial bombardments on Saturday, as many as 18 people, including women and children, lost their lives in the northern Province of Sa'ada. 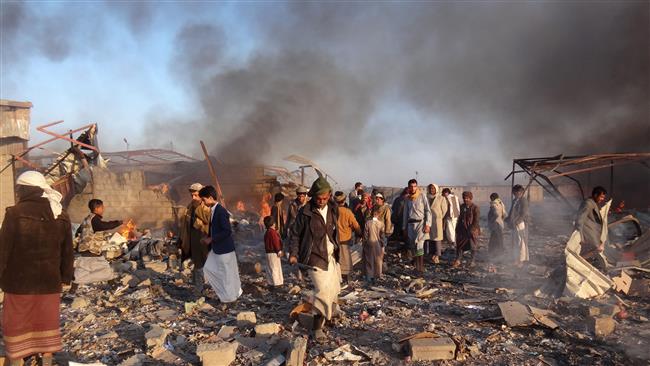 RNA - Mimi al-Laham, a peace activist, blamed Saudi officials for the disastrous humanitarian situation in Yemen, adding that “because of the hypocrisy of Western and international governments, who are supporting the Saudi bombings, specifically the UK and the US, and their humanitarian organizations and NGOs, which are controlled by these governments, the suffering of Yemeni people hasn’t been highlighted.”

The only issues that Western countries would like to talk about, al-Laham continued, are those that are aligned with Washington's interests, such as Russia’s assistance to the Syrian government.

“So, Yemen highlights this hypocrisy of the world and specifically the Western world,” the analyst underlined.

Asked about the ultimate goal behind Saudi Arabia’s campaign, she said that Saudi troops are fighting against Yemen on behalf of the US in a bid to help maintain Washington’s hegemony and guarantee its control on the strategic region.

“The US constantly tries to create regime change in countries where there isn’t any US hegemony,” Laham said, adding that when Yemeni people rejected Washington’s dominance, the US turned to Saudi Arabia to maintain its control.

According to Press TV, the Saudi military campaign was launched in March 2015 with the aim of reinstalling Yemen’s former Riyadh-backed government and crushing the country’s Houthi Ansarullah movement, which has been both running state affairs and defending the nation against the aggression.

Around 13,600 Yemenis have so far lost their lives in the war.

Tags: Yemen Saudi
Short Link rasanews.ir/201pY5
Share
0
Please type in your comments in English.
The comments that contain insults or libel to individuals, ethnicities, or contradictions with the laws of the country and religious teachings will not be disclosed