Lebanon committed to secure own border against Israel: President Aoun

Rasa - Lebanese President Michel Aoun says Beirut is strongly committed to preserve calm on its southern border, urging the US to play an “effective role” to help settle land and maritime disputes with the Israeli regime. 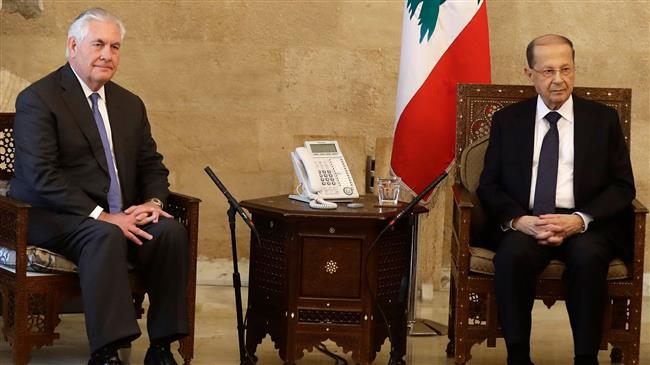 RNA - The Lebanese president made the comments in a meeting with US Secretary of State Rex Tillerson in Beirut on Thursday, as the American top diplomat was in the Mediterranean country on a brief stopover amid an increasing dispute between Lebanon and Israel over oil and gas reserves.

The occupying regime in Tel Aviv has also infuriated Beirut after it commenced the construction of a provocative border wall that Lebanon says encroaches on its territory.

According to a statement released by the presidency, Aoun further urged Washington to “work on preventing Israel from continuing its assaults on Lebanese sovereignty” by land and sea, adding that Lebanon was sticking by its internationally recognized borders, and rejected Israeli claims over a disputed maritime zone.

Tillerson, for his part, expressed concern over the involvement of the Lebanese resistance movement of Hezbollah in regional conflicts, claiming it posed a threat to the security of Lebanon. He also alleged that the movement was a destabilizing influence in the Middle East.

“Hezbollah is not just a concern for the United States. The people of Lebanon should also be concerned about how Hezbollah's actions, its growing arsenal, bring unwanted and unhelpful scrutiny on Lebanon," Tillerson further alleged.

Tillerson’s interfering remarks against Hezbollah came just a day after he made quite different comments about the resistant movement, reflecting a sharp contrast regarding the US’s long-held stance in favor of Israel and against Hezbollah.

"We ... have to acknowledge the reality that they [the Hezbollah] also are part of the political process in Lebanon,” the American top diplomat said at a press conference in Jordan on Wednesday.

Washington claims that the resistance movement condones terrorism despite the fact that Hezbollah has been involved in a fierce fight against Daesh terrorists in Syria.

According to Press TV, Hezbollah was founded in the 1980s following the Israeli invasion and occupation of southern Lebanon. The movement launched a resistance campaign against Israeli forces and pushed them out of southern Lebanon in May 2000. Since then, the group has grown into a powerful military force. Israel also suffered a humiliating defeat from Hezbollah in the 2006 war.

The United States has also been accusing Hezbollah of being a proxy of Iran through which Tehran interferes in Lebanon’s internal affairs.

The secretary general of the Lebanese resistance movement, Seyyed Hassan Nasrallah, has categorically denied accusations that Iran is interfering in the internal affairs of Lebanon, adding that there is no evidence for the allegations.

Hezbollah, both a military force and a political movement, is part of a Lebanese government made up of rival factions.

Tags: Israel Lebanon
Short Link rasanews.ir/201pXM
Share
0
Please type in your comments in English.
The comments that contain insults or libel to individuals, ethnicities, or contradictions with the laws of the country and religious teachings will not be disclosed