Rasa - New figures showed that more than 50 Palestinians have died waiting for Israeli exit permits to leave Gaza for medical treatment, as the number of visas granted hit a record low. 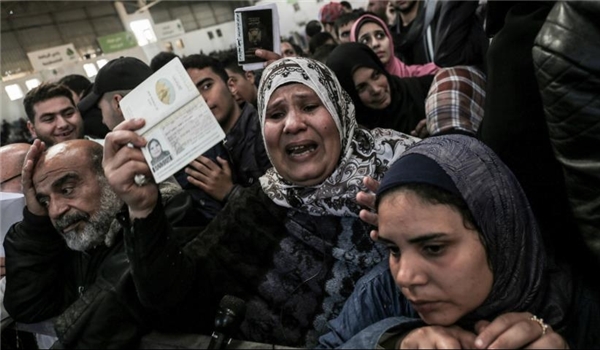 RNA - A total of 54 Palestinians died awaiting permits in 2017, research by Al-Mezan Center for Human Rights found, in what rights activists called an overly bureaucratic system which deprives Palestinians of their right to healthcare, The New Arab reported.

The World Health Organisation said Israeli authorities approved permits for medical appointments for only 54 percent of those who applied in 2017, the lowest rate since the WHO began collecting figures in 2008.

As a result, 54 Palestinians, 46 of whom had cancer, died in 2017 following denial or delay of their permits.

"We're seeing Israel increasingly deny or delay access to potentially life-saving cancer and other treatment outside Gaza, with shockingly high numbers of Palestinian patients subsequently dying, while Gaza's healthcare system – subjected to half a century of occupation and a decade of blockade – is decreasingly able to meet the needs of its population," according to MAP's CEO Aimee Shalan.

Gazans require Israeli permits to leave the enclave and travel to Jerusalem or the West Bank for treatment which the Palestinian Authority, the internationally recognised Palestinian government, pays for. High-quality medical care for conditions such as cancer is not possible in Gaza, largely due to a shortage of facilities and Israel's restrictions on imports of key medical technology. Israel argues rigorous checks are necessary for security reasons for those coming from the Gaza strip.

According to Fars News Agancy, of more than 25,000 applications to travel for treatment in 2017, only 54 percent were granted in time for their appointments. This was down from 62 percent the year before and 92 percent as recently as 2012, the WHO reported.

Omar Shakir, Israel-Palestine head for HRW, said they had seen "wider and wider" use of security justification to reject or delay permits for Palestinians.

Amid widespread poverty and unemployment, at least 10 percent of young children are stunted by chronic malnutrition, up to half of all medicines and medical data-x-items in Gaza are completely depleted or below one month's supply, and chronic electricity shortages have caused officials to cut health and other essential services.

Tags: Palestinian Israel
Short Link rasanews.ir/201pXD
Share
0
Please type in your comments in English.
The comments that contain insults or libel to individuals, ethnicities, or contradictions with the laws of the country and religious teachings will not be disclosed