Rasa - Saudi Arabia is fast approaching trial time on its illegal war on Yemen, as the international humanitarian community will soon have to respond against them. This includes the United Nations and the International Criminal Court in The Hague. 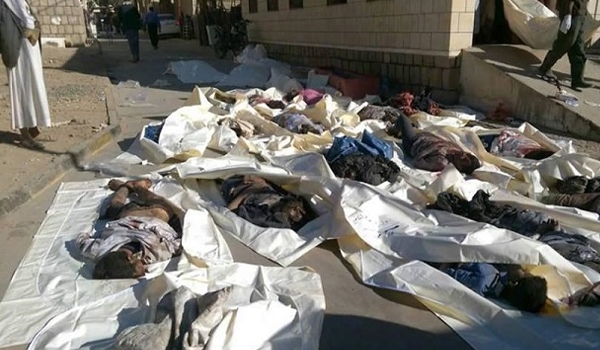 RNA - While the United Nations and the international civil society insist they want a peaceful resolution to the worst humanitarian crisis in the 21st century, Riyadh dismisses the idea of diplomacy in the assessment, saying they wouldn’t be willing to bargain away their stated goal, which is regime change in Sana’a.

However, since many people are dying and the country is facing famine, there is no time in which the Saudis and their allies can threaten Yemen any further. Simply put, Yemen is dying and time is almost here. There is an increasing rate of civilian casualties. According to the UN aid agencies, the upsurge in fighting is of particular concern. Civilians are under fire, as Saudi-led forces carry out airstrikes and indiscriminate bombing, without taking care to spare the civilian population, much less respecting the principles of distinction, proportionality and precaution.

This is while any intentional, direct attack against civilians or civilian objects is considered a serious violation of International Humanitarian Law and the UN Charter. The warmongers refuse to take any feasible precautions to avoid, or in any event, minimise, the impact of violence on civilians. And that’s when it’s safe to conclude that the UN and the International Criminal Court in the Hague will have to step in to stop the protracted conflict and hold to account those who want this crisis to continue apace – one way or another:

- It is true that in the wake of unlawful US-backed, Saudi-led bombing, some Western governments have decided to suspend the sale of weapons worth tens of billions of dollars to Saudi Arabia. It is a recognition, a long time in coming, that the Saudi-led coalition’s military campaign in Yemen have devastated the country, killed thousands of civilians and brought it to the brink of famine. However, unlawful airstrikes still continue, which means the decision by some Western governments to suspend arms sales has sent no message to the Saudis. US President Donald Trump, in his first trip to Riyadh for instance, sent an alternative, deeply troublesome message. He sold American weapons to the Saudis worth $110 billion - nearly as much as President Obama authorized during his eight years in office.

- The deals include Raytheon bombs, Lockheed Martin missile defense systems and BAE combat vehicles, and some of the weapons whose sales had been suspended. Thanks to these weapons, the scars of unlawful airstrikes can be found across Yemen, where the Saudi-led coalition has carried out scores of attacks that hit homes, schools, markets, and hospitals since March 2015, when it began its military campaign against the Ansarullah resistance movement and forces loyal to the former President Ali Abdullah Saleh.

- Human Rights Watch has documented numerous unlawful coalition attacks over the last three years, many war crimes. In many of these cases, including the attacks on funeral halls and markets, the organization’s investigators were able to identify the US weapons that were used. These are the very same weapons that continue to drive Yemen, already the poorest nation in the Middle East, toward humanitarian catastrophe.

- Both the Saudi-led coalition and their American allies have blocked or restricted critical relief supplies from reaching civilians. Seven million people face starvation and cholera ravages parts of the country. The UN should be urging the Saudis to shift course by abiding by the laws of war and holding those responsible for past abuses to account.

- Without Washington’s much-needed support and consent this war can never continue. By going to Riyadh to sell the Saudis weapons worth over $110 billion, President Donald Trump effectively told them to continue as before and not to worry about any international backlash at the UN - the flow of US weapons would not stop. This makes the US government complicit in Saudi war crimes. Continued US arms sales to a country that has repeatedly violated the laws of war expose US officials to legal liability for aiding and abetting Saudi war crimes.

It is against this backdrop and others that the UN and The Hague should step in, introducing a resolution intended to end the US-backed, Saudi-led war on Yemen. The resolution should end US arms transfers to Saudi Arabia, as requiring the White House to certify that the Saudi-led coalition is taking all feasible precautions to minimize civilian casualties is not going to mean anything at all – let alone end the human suffering there.

The UN and the International Criminal Court in The Hague are in the know that the people of Yemen can take no more and that they need to react fast. Innocent people are suffering from unlawful airstrikes because the US supports the Saudi-led coalition and because US weapons have been used against civilian populations. This is an international legal problem the UN and the ICC should be paying more attention to. If they won’t try to curtail the ongoing Us-backed war crimes by Saudi Arabia and the rest of the coalition, no other world body would ever step in to make clear - by using its own power to end the war - that the lives of Yemeni civilian can no longer be disregarded.

Tags: Yemen Saudi
Short Link rasanews.ir/201pX8
Share
0
Please type in your comments in English.
The comments that contain insults or libel to individuals, ethnicities, or contradictions with the laws of the country and religious teachings will not be disclosed