US instrumental in Daesh, terrorism spread in Middle East: Iran

Rasa - The United States has played a key role in the expansion of Daesh and other terrorist groups across the Middle East, says an Iranian diplomat at the United Nations, condemning Washington's new accusation that Iran destabilizes the region. 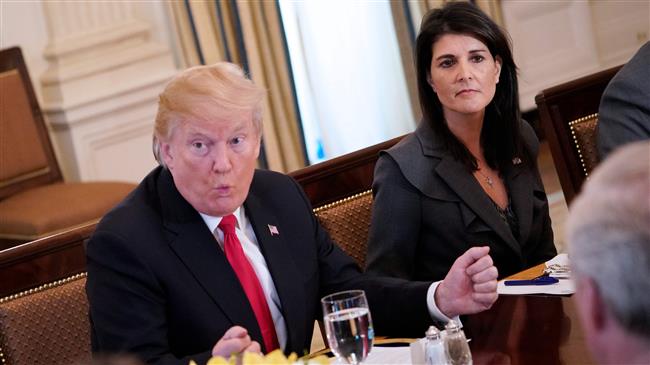 RNA - Alireza Miryousefi, a spokesman for the Iranian mission to the UN, made the remarks on Wednesday, after US envoy to the world body Nikki Haley claimed during a Security Council session on Syria that the Iran was a "destabilizing" force in the war-torn country.

In a statement issued online, Miryousefi said Haley's "baseless" statement did little to undermine Iran's "sincere" efforts to de-escalate the situation in Syria in the face of Washington's "push to thwart" them.

"The US government has been instrumental in the growth of Daesh and terrorism in the Middle East," said Miryousefi. "Its misadventures and illegal interventions across the region, especially Iraq, Libya, Lebanon, Afghanistan and Syria, are destabilizing and have had disastrous consequences for these countries and the region."

Washington could not "cover up its destructive role" by putting the blame on other countries, Miryousefi asserted.

The Iranian diplomat also questioned America's unconditional support for Israel despite the fact that the Tel Aviv regime is the "primary" source of instability in the region due to its "illegal and aggressive practices."

Russia hits back at US

In her speech, Haley also lashed out at Russia for not using its leverage over Syrian President Bashar al-Assad to end the war.

Russian Ambassador Vassily Nebenzia rejected the charge, saying Russia was doing its part and it was the US and its allies that did not use their influence to stop the violence.

Syria in most 'dangerous, violent' times

Also addressing the UNSC meeting on Wednesday was the UN Syria peace mediator Staffan de Mistura, who said the conflict had reached its most perilous stage.

“I have been now four years (as) special envoy, this is a violent and worrying and dangerous a moment as any that I’ve seen in my time,” he said of the conflict, which has killed hundreds of thousands of Syrians and displaced millions more since its onset in 2011.

According to Press TV, after losing most of the Syrian territories in their control, Daesh terrorists are now largely concentrated in Eastern Ghouta and the northwestern province of Idlib.

Last week was one of the bloodiest ones over the past years as Syrian government forces continued its attacks to free those areas, where many suffer from malnutrition and lack of basic medical supplies.

“What we are seeing in Syria today not only imperils the de-escalation arrangements and regional stability, it also undermines the efforts for a political solution," he said, noting that the UN would continue its Geneva peace initiative, although it has failed to bear any fruit.

The UN special envoy also called on Iran, Russia and Turkey to use their regional influence in order to resolve the deadly conflict.

The three countries have been organizing peace talks for Syria in Kazakhstan's capital of Astana since January 2017. Together, they have been acting as guarantor states for the peace process.

Tags: US Iran
Short Link rasanews.ir/201pX4
Share
0
Please type in your comments in English.
The comments that contain insults or libel to individuals, ethnicities, or contradictions with the laws of the country and religious teachings will not be disclosed