Rasa - Palestinians have stepped up diplomatic efforts to find international partners that would replace the United States and undertake the role of mediator in a “peace process” involving Palestine and Israel. And Now Palestinian Foreign Minister Riyad al-Maliki says Russia could play host to any future negotiations between the two sides. 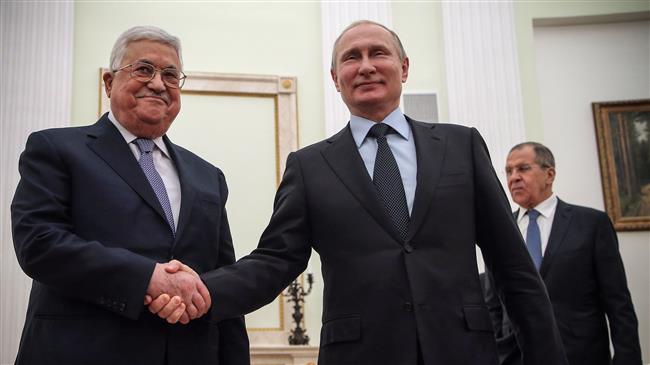 “Absolutely, we are ready for direct talks through a third party, of course,” he said. “We think, you know, probably, coming to Sochi or maybe to Moscow could be the right one, if Netanyahu is willing to do so.”

The top Palestinian diplomat further advised the Israeli ambassador to Russia “to look into it (the proposal) and to show the positive attitude.”

Last December, US President Donald Trump angered Palestinians and the entire international community by declaring that Washington was giving Jerusalem al-Quds the US government's recognition as Israel’s “capital.”

The dramatic U-turn broke a longstanding international consensus that the status of the Israeli-occupied city be decided through Israeli-Palestinian negotiations, prompting Abbas to formally declare that Palestine would no longer accept the US as a mediator in the decades-long conflict due to its bias towards Tel Aviv.

On Monday, Abbas visited Russian President Vladimir  in Moscow to discuss a collective mechanism to mediate possible negotiations with Tel Aviv in place of Washington.

Abbas told Putin, “We state that from now on we refuse to cooperate in any form with the US in its status of a mediator, as we stand against its actions.”

Elsewhere in his interview, Maliki stressed that Palestine is considering legal options in case Tel Aviv and Washington derail the future talks, the last round of which collapsed in 2014 mainly because of Israel’s refusal to end its unlawful settlement expansion on occupied territories.

“We are asking the advice of many internationally recognized legal experts to help us also to focus on different specific legal tracks …, if the negotiations track is closed by the rejection of Israel and the United States, that means that they are not leaving us with many options but to focus on the legal one,” he said.

“First of all, Israel represents an occupying power… and this is something we should really address maybe through the ICJ. When it comes to the criminal actions ... then we could back to the ICC, when it comes to some actions taken by Israel like trying to sell settlement products, then we will go to the European court, or to the national country courts,” he pointed out.

Palestinians want the resolution of the conflict with Tel Aviv based on the so-called two-state solution along the pre-1967 boundaries.

However, Israeli officials insist on maintaining the occupation of Palestinian territories and press ahead with their settlement activities.

Tags: Palestinian Israel Russia
Short Link rasanews.ir/201pWu
Share
0
Please type in your comments in English.
The comments that contain insults or libel to individuals, ethnicities, or contradictions with the laws of the country and religious teachings will not be disclosed