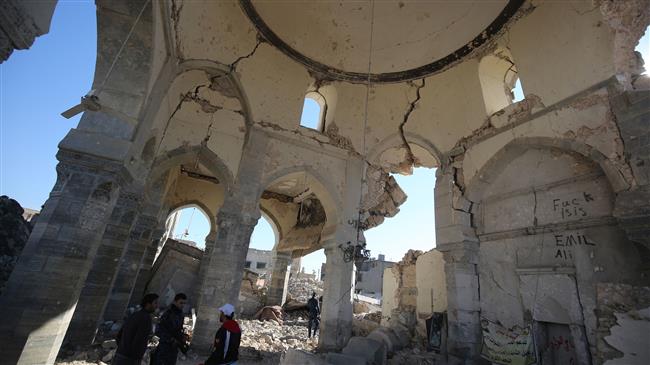 RNA - Qassemi on Monday added that Iraq is a friendly and neighboring country to Iran and noted that Iranian Foreign Minister Mohammad Javad Zarif plans to take part in the Kuwait International Conference for the Reconstruction of Iraq (KICRI).

He said the Islamic Republic does not hesitate in supporting the Iraqi nation and government and as it stood by them in the fight against terrorism, it would continue to support them.

"The Islamic Republic of Iran will continue its supportive and constructive role in the post-Daesh era through helping Iraq's reconstruction and economic development like in other political and security fields," the spokesperson said.

KICRI kicked off in Kuwait City on Monday with the focus on the reconstruction of Iraq and vital issues concerned after the end of war. The three-day meeting brings together several economic powers and regional and international organizations to discuss needed contributions to rebuilding Iraq after many years of war and conflict that ripped through various parts of the Arab country.

The meeting is co-chaired by Kuwait, Iraq, the United Nations, the European Union and the World Bank.

Iraqi Prime Minister Haider al-Abadi has said his country needs up to 100 billion dollars to rebuild territories that have been torn apart by Daesh.

According to Press TV, the Takfiri terrorists captured areas in the north and west of Iraq in 2014 and even managed to reach areas near the capital Baghdad. However, Iraq recaptured the cities, towns and villages one by one, and authorities declared after the liberation of Mosul last July that the country was effectively purged of militants.

US and Western officials said earlier this month that Washington has no plan to allocate money to the reconstruction of Iraq at the international fund-raising conference in Kuwait.

A US official said, “We are not planning to announce anything” at the conference, which will be attended by US Secretary of State Rex Tillerson.

Tags: Iran Iraq
Short Link rasanews.ir/201pWX
Share
0
Please type in your comments in English.
The comments that contain insults or libel to individuals, ethnicities, or contradictions with the laws of the country and religious teachings will not be disclosed