Rasa - The Syrian army soldiers warded off terrorists' attack on their positions in Homs province after hours of clashes, inflicting major losses on them. 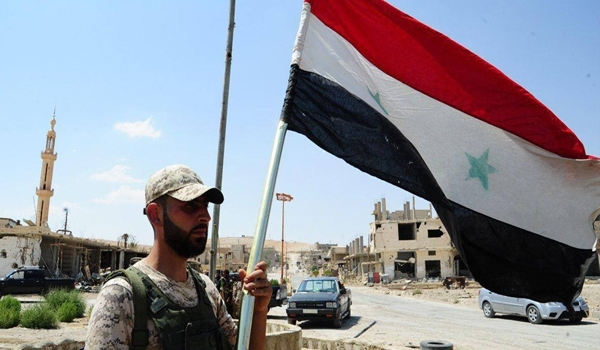 RNA - The terrorist attack to capture the government forces' positions in the Northeastern Homs was fended off by the strong defense of the Syrian military men.

Meantime, the Syrian army continued its military advances in other parts of Syria, including Deir Ezzur, over past 24 hours.

The Syrian Army forces warded off the terrorist groups' heavy offensive in Northeastern Homs, inflicting major losses on the militants on Sunday.

The army men repelled a heavy attack of the terrorists near the village of Salim in Northeastern Homs, killing or wounding a number of gunmen.

In the meantime, the army's artillery units pounded terrorists' positions in al-Sa'an al-Aswad, Hawsh Hajwa and Talbiseh regions in Northern Homs after the militants violated ceasefire in de-escalation zone and targeted the army positions.

The army's heavy fire inflicted major losses on the militants.

The Syrian Army has sent a large number of fresh forces and a large volume of military hardware to Eastern Deir Ezzur after its positions in the region were pounded by the US fighter jets a couple of days ago, field sources reported on Sunday.

The sources said that the army has dispatched a large number of forces and a large volume of military equipment to the Eastern bank of the Euphrates River in Eastern Deir Ezzur.

The sources further added that several artillery units and military vehicles were sent to al-Jazeera Khasham, al-Tabiyah and Marat.

The US-led coalition carried out several airstrikes on Syrian forces in Deir Ezzur province on Thursday.

The US military was claiming that so-called anti-ISIL coalition forces repelled a threatening Syrian Army-led attack consisting of five hundred troops – backed by artillery, tanks, multiple-launch rocket systems and mortars – late on Wednesday and early on Thursday against positions of Arab and Kurdish militias at energy fields near the town of Khasham on the Eastern bank of the Euphrates River in Deir Ezzur province.

According to reports, more than 100 pro-government forces were killed in the airstrikes carried out by the US-led coalition in Syria's Deir Ezzur.

The news websites reported that Abu Asyad al-Babi was killed in a remote-controlled blast in his vehicle by a group of unknown assailants.

The websites further said that al-Babi was a commander of the Al-Nusra air defense battalion deployed in Northern Badiyeh (desert) that shot down a Russian fighter jet in Saraqib in Idlib province a couple of days ago.

Meantime, a number of gunmen have been killed in tough battle between the ISIL and the Al-Nusra Front in Southeastern Idlib, field sources reported on Sunday.

The sources said that the Al-Nusra and ISIL suffered heavy casualties after the two main terrorist groups engaged in fierce clashes near Um al-Khalalil region in Southeastern Idlib.

The sources said that 20 gunmen of ISIL and Al-Nusra were killed in the clashes as the former tried to expand its regions in Southeastern Idlib.

The Syrian Army troops fended off a heavy offensive of a group of terrorists in Northern Lattakia, killing the entire members of the group on Sunday.

The army men exchanged heavy fire with a group of terrorists after militants violated the de-escalation zone's ceasefire agreement in Tal Hadadah East of the town of Kinsibba in Northern Lattakia.

The army men warded off the attack and killed all the gunmen of the terrorist group.

The Turkish Army troops and Ankara-backed militants continued Operation Olive Branch against the Kurds and imposed control over a village and a key height in Northern Aleppo, dissident-affiliated websites reported on Sunday.

The websites reported that the Ankara-backed militants and army men stormed the Kurdish fighters' positions Southwest of Jandaris region and captured the village of Deir Balout and its hill.

The sources said that the forces of Operation Olive Branch managed to create a passageway between Idlib province and the villages and towns they have captured in Northern Aleppo after their recent advances in Jandaris.

The sources affiliated to the Ankara-backed militants confirmed on Thursday that they took control of Tal al-Hawez during clashes in Bolbol region in Northern Afrin.

Meantime, the Kurdish forces announced that they have regained control of the village of Sheikh Khorouz from Ankara in Bolbol region.

They also declared destruction of a tank belonging to the Turkish army in the village of Qastal Khazrya in Bolbol region.

Tags: Nusra Syria ISIL
Short Link rasanews.ir/201pWB
Share
0
Please type in your comments in English.
The comments that contain insults or libel to individuals, ethnicities, or contradictions with the laws of the country and religious teachings will not be disclosed