Rasa - Myanmar says it will take unspecified action against a number of security forces and civilian individuals in connection with a recent massacre in a Rohingya Muslim village, during which 10 Muslims — whom Naypyidaw has previously called “terrorists” — were executed summary-style. 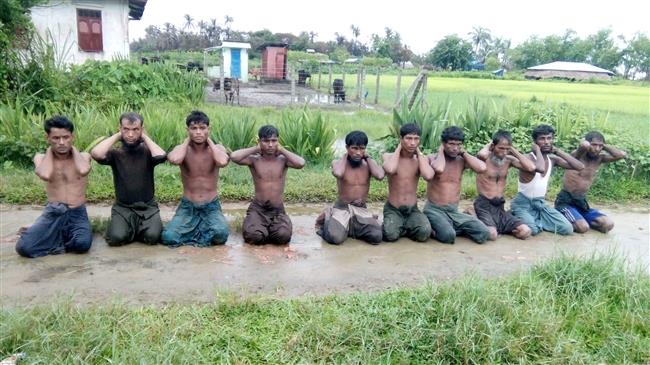 RNA - A Myanmarese government spokesman, Zaw Htay, said on Sunday, that “action according to the law” would be taken against seven soldiers, three members of the police force, and six villagers for the massacre of 10 Rohingya men in the village of Inn Din, who were buried in a mass grave after being hacked to death or shot by Buddhist neighbors and soldiers.

That massacre was reported in graphic detail by Reuters, two of whose reporters working on the story have been detained and face criminal charges by the Myanmarese state.

Naypyidaw has long denied the widespread and well-documented reports of horrific violence being carried out by the military and Buddhist mobs against the Rohingya Muslims in western Rakhine State.

Rakhine has been under military siege since late 2016, and the government has barred access to independent media. Nevertheless, the hundreds of thousands of Rohingya Muslims who have survived the state-sponsored campaign of violence and who have made it to neighboring Bangladesh have recounted the atrocities.

Zaw, the government spokesman, claimed that the decision to take unspecified action against the perpetrators of the Inn Din massacre had not been made because of the attention that the Reuters story had attracted to the incident.

The arrests were “not because of Reuters news. The investigation was being conducted even before Reuters news,” Zaw claimed.

Reuters confirmed on Friday that its two journalists — Wa Lone, 31, and Kyaw Soe-oo, 27 — had in fact been detained because of their coverage of the Inn Din Village massacre.

According to Press TV, the military admitted to the massacre after the Reuters report gained widespread attention. The military said the 10 Rohingya Muslims killed in Inn Din belonged to a group of 200 “terrorists” who had attacked security forces there. However, Buddhist villagers rejected that claim, saying soldiers plucked the 10 people killed from among hundreds of men, women, and children who had sought safety on a nearby beach.

The Myanmarese military intensified its “clearance operations” against ethnic Rohingya in August last year. The United Nations has described the military crackdown as a textbook example of “ethnic cleansing.”

Tags: Muslim Rohingya Myanmar
Short Link rasanews.ir/201pW3
Share
0
Please type in your comments in English.
The comments that contain insults or libel to individuals, ethnicities, or contradictions with the laws of the country and religious teachings will not be disclosed