Rasa - Lieutenant Commander of the Islamic Revolution Guards Corps (IRGC) Brigadier General Hossein Salami underlined that Iran does not confirm any report by Tel Aviv, including its report on downing an Iranian drone, as Israel is the source of fake news. 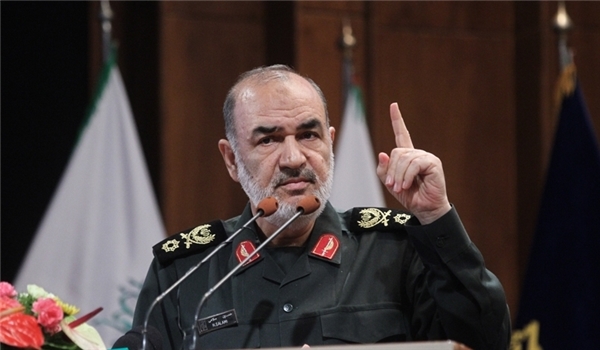 RNA - "We don’t confirm any news by Israel. If the Syrians confirm, we will confirm too; because the Israelis are liars," General Salami said on Saturday when asked by reporters about Israeli officials' claim about downing an Iranian drone at the border between Syria and the territories occupied by Israel.

"We have no military presence in Syria and we are present in Syria for an advisory role and the presence of the Syrian army to defend their territories is adequate," he added.

Elsewhere, General Salami blasted the US deployment in Syria as "illegitimate", warning that the American forces should leave the region before sustaining a defeat.

Asked about Turkey's operations in Syria, he said, "The presence of no power in Syria is acceptable and legitimate unless the Syrian government agrees. Any power, either the US or any other country, which goes across the international borders has violated the sovereignty (of the second country). It is not a desirable and legitimate move. Usually, such interventions are not successful."

"The presence of Americans in no Islamic country is legitimate. This presence creates insecurity and spreads terrorism and the United States' continued deployment in the region increases the reach of terrorism," General Salami said, adding that the US presence also imposes military and economic expenses on the region.

A Syrian media outlet reported on Saturday that the country's Air Defense Units targeted an Israeli warplane after it raided the Syrian Army positions in the Central part of Syria.

The state-run SANA news agency quoted a field source as saying that an Israeli warplanes embarked on targeting a military base of the Syrian Army in Central part of the country on Saturday morning, adding that the Syrian air defense units tracked the warplanes and targeted more then one of them.

In the meantime, an Israeli media source reported that one of the Israeli jets was downed in al-Jalil region in Northern occupied Palestine by the Syrian air defense units' fire in the occupied Golan region.

Also, the Arabic-website of Russia's Sputnik quoted Spokesman for the Israeli Army Avikhai Adra'ei as saying that the Syrian air defense units targeted an Israeli F16 fighter jet in Northern part of Palestine, adding that the downed warplane's pilots are alive and in good health condition.

The Israeli spokesman further claimed that an Iranian drone entered airspace of the occupied Palestine, but an Israeli combat helicopter targeted it. Iranian officials have rejected the claim.

The Joint Operations Room run by the allied forces of Syria, Hezbollah, Iran, and Russia said the drone never crossed the border into Israel, adding that Israel has raided its drone base at the T4 airbase in Central Homs province in Central Syria far away from the Israeli border. The operations room said the drones operating at the base are tasked with collecting vital intel on ISIL in Syrian territories. It also warned that the incident crossed the border of its tolerance, implying that it would reciprocate any further aggression by Israel.

In the meantime, other sources said that the two pilots of the down Israeli jet were injured and one of them is in critical condition.

Some sources reported that the badly inured pilot was wounded before ejecting form the warplane.

Damascus stressed on Thursday that the repeated Israeli attacks on Syria are a continuation of Israel’s aggressive approach represented by supporting terrorist groups to prolong the crisis in Syria and to raise the morale of the terrorists.

In a letter sent to the United Nations Secretary General Antonio Guterres and the UN Security Council, Syria's Foreign Ministry stressed that the continuation of Israel’s attacks only serves to support terrorist groups and to prolong the crisis in Syria.

"The government of the Syrian Arab Republic reiterates its warning to Israel on the serious repercussions of its attacks on Syria, its continued support for armed terrorist organizations, and its continued occupation of the Arab territories, including the occupied Syrian Golan, and it holds Israel fully responsible for that,” it said.

It further went on to condemn the Tel Aviv regime's latest attack in which Israeli aircraft launched missiles from the Lebanese airspace on an area in Damascus countryside.

The letter noted that the attack coincides with "the launching of more than 1,000 rockets and mortar rounds during the past few days on neighborhoods, suburbs, diplomatic missions, service facilities, and churches in Damascus and other cities, where dozens of civilians were killed and hundreds others were wounded, most of them women and children."

The letter concluded by calling on the UN and the Security Council to condemn such actions and to take firm and immediate measures to halt those attacks.

During the past few years, Israel has frequently attacked military targets in Syria in what is considered as an attempt to prop up terrorist groups that have been suffering heavy defeats against Syrian government forces.

On several occasions, the Syrian army has confiscated Israeli-made arms and military equipment from militants fighting pro-Damascus forces. Israel has also been providing medical treatment to the extremist militants wounded in Syria.

Tags: IRGC Israel
Short Link rasanews.ir/201pVX
Share
0
Please type in your comments in English.
The comments that contain insults or libel to individuals, ethnicities, or contradictions with the laws of the country and religious teachings will not be disclosed