Rasa - Lieutenant Commander of the Islamic Revolution Guards Corps (IRGC) Brigadier General Hossein Salami blasted the US and its regional allies for hatching plots for the regional countries, and said the regimes in Washington, Tel Aviv and Riyadh will collapse in the near future. 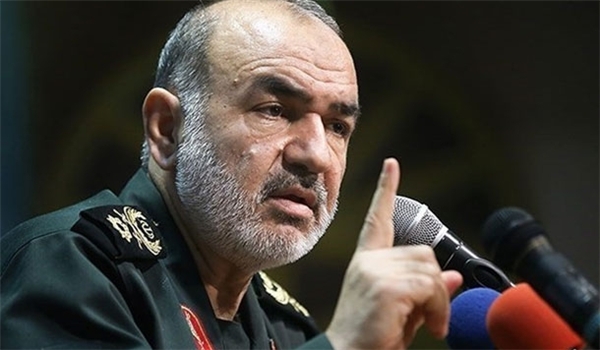 RNA - "The enemies had hatched plots to partition the country with the purpose of undermining the Islamic Republic's independence, unity and territorial integrity; the United States, the Israeli regime and Saudi Arabia as well as their allies will collapse very soon," General Salami said.

He underlined that all the enemies' plots against Iran have so far been thwarted thanks to the nation's bravery and the guidelines of the Supreme Leader of the Islamic Revolution Ayatollah Seyed Ali Khamenei.

"The enemies have so far experienced nothing but defeat at the hands of the Islamic establishment," Salami added.

He said the enemies had been seeking to wage psychological warfare against Iran to undermine the achievements of the Islamic Revolution but such a plot had also been foiled.

Salami, meantime, praised Iran's great achievements in the sectors of science, technology and military, and said the Islamic Republic could compete with the world’s advanced countries in such areas.

"Iran has one of the most advanced defense systems in the world," he said, adding that as part of the country's achievements, it has gained the capability to manufacture advanced radars, put satellites into orbit, build huge turbines and produce 98 percent of required medicine.

In recent years, Iran has made great achievements in its defense sector and has attained self-sufficiency in producing essential military equipment and systems.

In relevant remarks in September 2017, General Salami highlighted the significance of maintaining security across the region, warning of the global arrogance’s plots to alter the world’s geopolitical map.

"The global arrogance and its allies are making efforts to change the world’s geopolitical map," he added.

Tags: Hossein Salami US IRGC Israel
Short Link rasanews.ir/201pUZ
Share
0
Please type in your comments in English.
The comments that contain insults or libel to individuals, ethnicities, or contradictions with the laws of the country and religious teachings will not be disclosed