Rasa - The Palestine Liberation Organization (PLO) has decided to withdraw recognition of Israel as Washington’s recent hostile moves against the Palestinians deepen the decades-long conflict in the occupied territories. 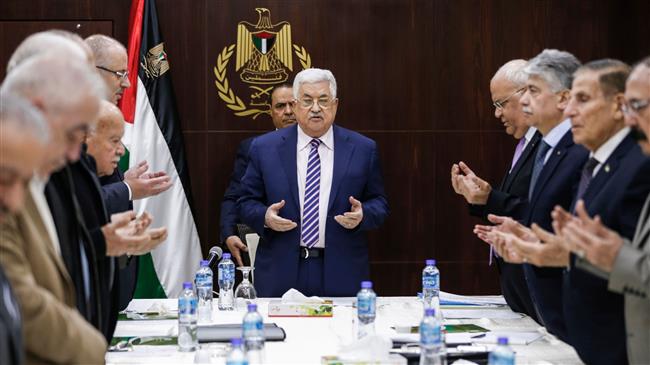 RNA - After a three-hour meeting in Ramallah on Saturday, the PLO Executive Committee released a statement saying it would set up a body to study derecognition of the Tel Aviv regime.

It also called on the Palestinian Authority to cut off all its relations with Israel, including security coordination in the West Bank.

Palestinian President Mahmoud Abbas should “immediately start preparing plans and projects for disengagement steps with the Israeli occupation ...  at the political, administrative, economic, and security levels,” the committee said.

It further decided to seek action against the Israeli occupation at the United Nations Security Council, the General Assembly and the International Criminal Court (ICC), demanding that the latter start a judicial inquiry into the regime's settlements, racial discrimination and ethnic cleansing in the occupied lands.

The request with the ICC was meant to bring Israeli officials before international justice in accordance with the Rome Statute of the ICC, which considers settlements as a war crime.

Elsewhere in its statement, the PLO committee blasted the US for leading a “campaign of incitement and distortion against President Abbas and the Palestinian leadership.”

The campaign, it said, is aimed at justifying Washington’s “arbitrary and punitive measures against the Palestinian people and providing a cover for passing its plan to liquidate the Palestinian cause.”

Last December, US President Donald Trump declared that Washington was recognizing Jerusalem al-Quds as the “capital” of Israel and planning to relocate the American embassy from Tel Aviv to the city.

In another hostile move against the Palestinians, the Trump administration said in January that it would withhold $65 million of a $125 million aid installment to the United Nations Relief and Works Agency for Palestine Refugees (UNRWA).

The US “must stop dealing with the Palestinians with the language of blackmail and threats. We call on the US administration to stop its hate speech and to stop denying the presence of the Arab Palestinian people in this country throughout history," the PLO committee said.

It also renewed its call on Trump to backtrack on his controversial decision to recognize Jerusalem al-Quds as Israel’s so-called capital.

Additionally, the committee accused Tel Aviv of failing to fulfill its obligations under the agreements signed with the Palestinians and demanded a ban on goods produced in settlements.

The Israeli regime is expected to discuss on Sunday a retroactive approval to Havat Gilad outpost in the occupied West Bank, which houses about 40 settler families.

"We promised and the proposal to normalize Havat Gilad outpost as a regular community will be brought to the cabinet for approval this coming Sunday,I" Avigdor Lieberman, Israeli minister of military affairs, tweeted earlier this week

Rabbi Raziel Shevach was shot dead near the outpost on January 9.

Israeli Education Minister Naftali Bennett had claimed that the only revenge for the rabbi's murder was building more settlements.

Tags: Israel PLO
Short Link rasanews.ir/201pUR
Share
0
Please type in your comments in English.
The comments that contain insults or libel to individuals, ethnicities, or contradictions with the laws of the country and religious teachings will not be disclosed