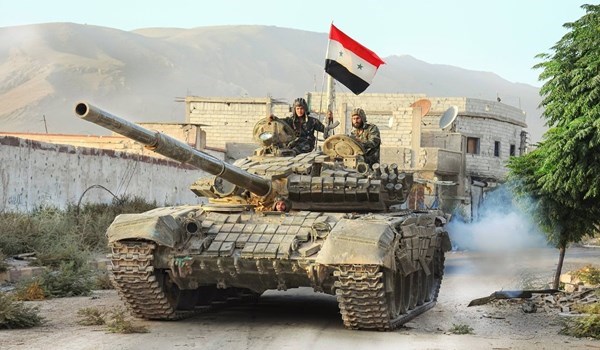 RNA - The army units engaged in tough battle with the Al-Nusra Front (Tahrir al-Sham Hay'at or the Levant Liberation Board) terrorists in Southern Aleppo after destroying the defense lines of the terrorists there and managed to capture several more strategic villages.

The Syrian Army troops beat back the Al-Nusra Front (Tahrir al-Sham Hay'at or the Levant Liberation Board) terrorists from two more villages in Southern Aleppo in their push towards the town of Saraqib in Eastern Idlib.

The army units stormed the positions of Al-Nusra and their affiliated terrorists and captured the village of Tal Mamou West of Kafr Hadad.

The army men further advanced against the Al-Nusra and imposed control over the strategic village of Jazraya.

Jazraya, located on the provincial border between Idlib and Aleppo, is a major junction town which commands many secondary (i.e. countryside) road routes that lead into and from both Syrian regions.

The Al-Nusra suffered a number of casualties and its military hardware sustained major damage in the army advances.

The army men are pushing towards the town of Saraqib in Eastern Idlib from Southern Aleppo and Southeastern Idlib.

Meantime, a number of Turkey-backed militants, including a senior field commander, were killed in Ankara's Operation Olive Branch against Kurds in Afrin region in Northwestern Aleppo.

The Kurdish-language Hawar news reported that four Ankara-backed militants including commander of al-Qaeda-linked Shohad Badr Battalion Abu al-Abbas, were killed and their military vehicle was destroyed in clashes with the Kurdish fighters in Kafri Kar area in Rajou region.

In the meantime, three vehicles of the militants affiliated to the Turkish army were destroyed in the Kurdish fighters' attack near the village of Khalil in Shiheh region, Hawar news reported.

It added that the Kurdish fighters carried out an ambush operation against the Turkish soldiers and allied militants in the village of Za'ara North of Afrin, killing at least 20 of them.

One of the main arms and ammunition depots of the Al-Nusra Front was targeted in the Syrian Armed forces' attack in Eastern Idlib.

The Syrian Army's artillery and missile units and Air Force targeted the Al-Nusra positions and movements near the terrorist-held town of Saraqib, destroying a large depot of weapons and munitions and a number of vehicles.

A number of Al-Nusra fighters were killed in the attack too.

Also, a field source confirmed the attack on Al-Nusra depot South of Saraqib, and reported several explosions in the depot after the attack.

Abdullah Muhammad al-Muhaysini, the former Saudi commander and Mufti (religious leader) of Tahrir al-Sham Hay'at (the Levant Liberation Board or the Al-Nusra Front) admitted on Friday that the terrorist group suffered heavy defeats in battle with the Syrian Army in Idlib and Aleppo provinces.

Al-Muhaysini confirmed in his twitter account that the Syrian Army inflicted heavy defeats on Tahrir al-Sham Hay'at in Aleppo and Idlib provinces, admitting that the terrorist group was in very bad condition.

He further pointed to the failure of a plan to form a Joint Operation Room against the army, saying lack of such Operation Room is behind the collapse of the militants' front.

The army men, backed up by artillery and missile units, stormed terrorists' strongholds in Harasta farms and imposed control over Qasr al-Kamal region and its nearby farms, the sources said, adding that the army took military control of the Milk Company after its advances in Qasr al-Kamal.

The sources added that the army has advanced against terrorists in several flanks and has now expanded the security zone around its positions up to 300 meters in the depth of militant-held regions.

Also, the artillery units and the army aircraft pounded terrorists' centers and positions in al-Salu and al-Raman farms, al-Ajami neighborhood and near the town of al-Modira in Eastern Ghouta.

Tags: Terrorist Syria Aleppo
Short Link rasanews.ir/201pUO
Share
0
Please type in your comments in English.
The comments that contain insults or libel to individuals, ethnicities, or contradictions with the laws of the country and religious teachings will not be disclosed