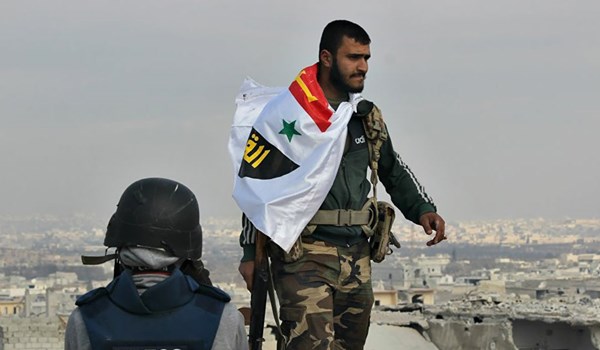 RNA - The army units engaged in tough battle with the ISIL terrorists in Northeastern Hama after destroying the defense lines of the terrorists there and managed to capture more strategic regions.

The Syrian army soldiers forced terrorists out of 3 more regions during military operations against the ISIL in Northeastern Hama.

The army forces, backed by heavy artillery and missile fire, continued clashes with the ISIL terrorists in Northeastern Hama, regaining control of the villages of Job Zariq, Southern Abu Khanadeq and Mazra'a al-Aw in Southern Abyan.

The Syrian army troops inflicted heavy damages and tolls on the ISIL terrorists during the operations.

The al-Nusra Front (Tahrir al-Sham Hay'at or the Levant Liberation Board) terrorists are in fear and panic due to the Syrian army forces' rapid advances in Southeastern Idlib towards the strategic town of Saraqib.

Meantime, the Syrian air force targeted the terrorists' positions and moves in Saraqib and the nearby areas, destroying them and killing a number of militants.

Local sources also reported that the al-Nusra commanders are now in panic and fear while the Syrian army is rapidly opening its way towards Saraqib and launches heavy airstrikes in the region.

The Syrian army bombed the terrorists' positions in Eastern Ghouta of Damascus after they violated the truce and attacked the international Damascus airport.

Field sources reported on Thursday that the terrorists in Eastern Ghouta have launched missile attacks against the Damascus airport and the residential areas of Dhahiyeh al-Assad in Harasta.

The Syrian army gave a crushing response to the attacks, the sources said, adding that the terrorists' positions in Eastern Ghouta of Damascus were heavily pounded with artillery and missile fire, destroying several of their positions and killing and wounding a number of militants.

Meantime, the artillery and missile units of the Syrian army targeted the terrorists' positions and moves in Harasta and the town of Arabayn, inflicting damages on the militants.

Kurdish media sources reported killing of dozens of Ankara-backed forces and militants during clashes between the Turkish army and the Syrian Kurds in Afrin.

The Kurdish-language Hawar news reported on Thursday that the Kurds launched operations against the Turkish army and its affiliated militants in areas near the villages of Boukeh and Ali Kari in Bolboleh region on the 12th day of the Afrin battle, killing 15 Turkish army forces and its supported militants and wounding a number of others.

The news outlet also confirmed that 3 Turkey-backed militants and army men were killed during the Kurdish forces' operations in the village of Khalil in Shiyeh region.

Meantime, 3 Turkish army military vehicles were destroyed in the Kurdish operation in the village of Shangal in Rajou region. All soldiers in the vehicles have reportedly been killed.

Tags: Syria Aleppo
Short Link rasanews.ir/201pTt
Share
0
Please type in your comments in English.
The comments that contain insults or libel to individuals, ethnicities, or contradictions with the laws of the country and religious teachings will not be disclosed