Trump glorified US militarism at State of the Union

Rasa - US President Donald Trump’s first State of the Union address was nothing but a “glorification” of American militarism, according to renowned US politician and thinker Ron Paul. 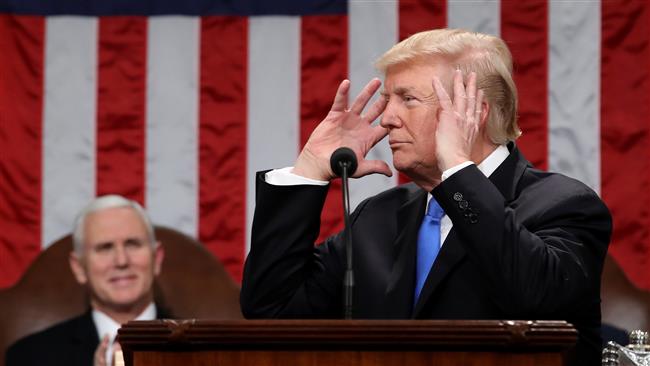 RNA - Paul, a former Republican congressman who has also run for presidency, said in an interview on the Ron Paul Institute for Peace and Prosperity's website that all Trump’s plan for expanding the US military was in no way nationalistic.

“It is one thing that the militarism is tied to patriotism and you see this coming together in… a negative way for our government [and] our taxpayer’s money,” Paul said.

During his first address before Congress on Tuesday, Trump urged lawmakers to “fully fund” the US military so that it can face what he referred to as “rogue regimes, terrorist groups, and rivals like China and Russia.”

As a candidate, Trump pledged an ambitious plan to equip the US military with 355 ships, 1,200 Air Force fighter jets and thousands more Marines.

After winning the 2016 face-off with his democratic rival, Hillary Clinton, the Republican head of state bumped up the US military spending to record levels of over $600 billion in exchange for cutting public spending.

US Defense Secretary Jim Mattis has said that Trump’s plans would require Congress to keep increasing the military budget through 2023.

In his SOTU, Trump also promised to upgrade the US military arsenal. Previous government assessments have warned that a full modernization of US nukes would cost $1.2 trillion over 30 years.

Paul said he was “disappointed” to see Trump’s words draw loud cheers from lawmakers on both sides of the aisle.

“We can have a strong military, [but] sensible and not have all this conflict,” he continued.

One of the “worst things” that Trump said during his speech, according to Paul, was announcing plans to keep the notorious US military prison on Guantanamo Bay open.

Before heading to the podium, the Republican president signed an executive order that would allow him to deliver on another controversial campaign promise of filling it with “bad dudes.”

The military prison costs taxpayers over $400 million a year while keeping 41 prisoners, without trial. The prison’s history is stained with torture and violent interrogations of alleged terrorists.

“Just think of what Guantanamo means to the world,” Paul said. “It is torture, ghastly pictures. It is not American greatness and that is terrible.”

“We assume that we have the moral responsibility, the legal responsibility to go about the world in every country and gather up these so-called enemy combatants that get charged for nothing… and we can put them there in long term detention,” he continued.

Trump’s decision to keep Gitmo open is a break from a failed promise his last three predecessors made to close it.

Tags: militarism US Trump
Short Link rasanews.ir/201pTk
Share
0
Please type in your comments in English.
The comments that contain insults or libel to individuals, ethnicities, or contradictions with the laws of the country and religious teachings will not be disclosed