Guantanamo used by US to go around torture laws

Rasa - It is no surprise that US President Donald Trump has signed an executive order to keep open the Guantanamo Bay prison, says a political analyst in Virginia, adding that Guantanamo is being used to go around US torture laws. 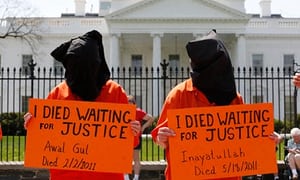 RNA - “This is entirely consistent with what he was saying during his electoral campaign, Donald Trump has always taken a hawkish position,” says Keith Preston, chief editor of AttacktheSystem.com.

Preston emphasized there is a “continuity to US foreign policy that transcends” the differences between the two major parties or the differences among US administrations and individual figures, including US presidents.

“Guantanamo is actually not part of the domestic United States and that way the intelligence services and the US military can actually get around US laws banning the torture of prisoners.”

In his State of the Union speech on Tuesday night, Trump said he has signed a new executive order to keep open the notorious Guantánamo Bay prison in Cuba.

"I just signed, prior to walking in, an order directing (Defense) Secretary (Jim) Mattis ... to re-examine our military detention policy and to keep open the detention facilities in Guantánamo Bay," Trump said.

Trump said that new prisoners, including members of terrorist groups like Daesh, will also be sent to the military prison.

"I am asking Congress to ensure that in the fight against ISIS [Daesh] and al-Qaeda we continue to have all necessary power to detain terrorists wherever we chase them down, wherever we find them. And In many cases for them it will now be Guantánamo bay."

"The United States may transport additional detainees to US Naval Station Guantanamo Bay when lawful and necessary to protect the nation," the order said.

The order described the detention operations at the prison "legal, safe, humane, and conducted consistent with United States and international law."

Trump’s decision reversed the unsuccessful attempt by his predecessor to shutter the controversial camp, which currently holds 41 inmates, down from 800 after its 2002 opening in the aftermath of the 9/11 attacks.

Former US President Barack Obama had pledged during his 2008 presidential campaign to close the military prison, but failed to fulfill his promise in the face of stiff opposition from the Congress.

In a speech in December 2016, Obama expressed disappointment over failure to close the prison during his term in office, saying it was a disgrace and a waste of money.

Tags: Trump Guantanamo
Short Link rasanews.ir/201pTf
Share
0
Please type in your comments in English.
The comments that contain insults or libel to individuals, ethnicities, or contradictions with the laws of the country and religious teachings will not be disclosed