Hundreds of protesters target Trump during State of the Union

Rasa - More than 200 protesters rallied outside Congress to denounce US President Donald Trump as he arrived for his first State of the Union address on Tuesday. 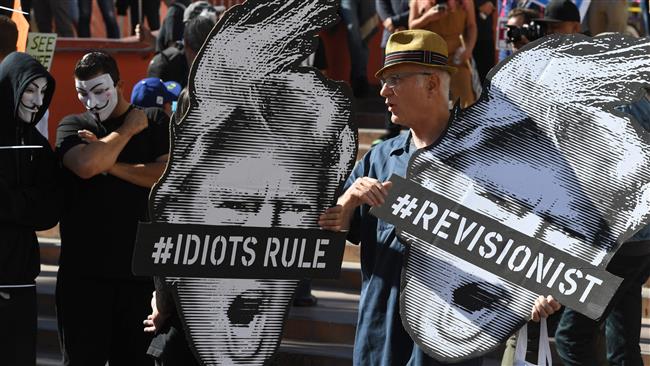 RNA - While waiting for Trump’s motorcade to arrive that the US Capitol, the protesters held placards that read “everybody hates you” and chanted “lock him up” and “hey hey, ho ho, Donald Trump has got to go.”

The demonstrators expressed their outrage over Trump’s failure to resolve the humanitarian crisis in Puerto Rico to women’s rights to immigration.

Organizers of the protest, including Resist DC, said they weren't gathering because of one key issue and hoped the event would serve as a forum for those angry with Trump and his policies.

“I’m here for one reason: I want our president to know that I do not approve of him,” said Gayelynn Taxey, an activist who participated in the march. “He needs to know that we aren’t happy.”

While carrying a sign reading, “The State of the Union is deplorable,” Jane Short said she had little hope for the rest of Trump’s presidency.

“I really don’t see him changing. I hope he can open his eyes and ears and see that his actions are hurting Americans,” she said. “His view of the state of the union is very different than what we see.”

Elisa McClelland held a sign reading “the state of our union is in disunion – sad.” She said Trump must grasp their message that change is needed.

“I’m a middle-aged mother of two. If I’m having to protest, you know something is wrong,” McClelland said.

As Trump’s motorcade passed the protesters, who stretched along an entire city block, the crowd broke out into loud boos and started shouting “shame!”

Trump has been condemned at home and abroad for his measures, including a ban on Muslim travelers from entering the US, failure to condemn white supremacists, ignoring the plight of hurricane-hit Puerto Ricans, and failure to fulfill his campaign promises.

Trump ended his first year in office with an approval rating that is the lowest in modern polling for a president at this point in a term. Indeed just six of the past 12 presidents ever went as low or lower in approval as Trump is now.

A majority of young Americans believe the United States is on the wrong track and disapprove of the way Trump is handling his job, according to a new poll by NBC News/GenForward.

Tags: Trump protest
Short Link rasanews.ir/201pTV
Share
0
Please type in your comments in English.
The comments that contain insults or libel to individuals, ethnicities, or contradictions with the laws of the country and religious teachings will not be disclosed