Majority of young Americans say US on wrong track: Poll

Rasa - A majority of young Americans believe the United States is on the wrong track and disapprove of the way President Donald Trump is handling his job, according to a new poll. 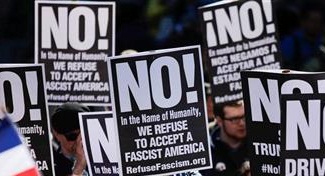 RNA - The survey by NBC News/GenForward published on Wednesday found that nearly two-thirds of young US adults (63 percent) say the country is headed in wrong direction.

Just 18 percent think the country is generally headed in the right direction, and another 18 percent are uncertain.

Even among those young adults who said they voted for Trump in the 2016 presidential election, 22 percent disapprove of him now.

At the same time, the poll revealed that a majority (61 percent) disapprove of the way Congress is handling its job.

The Democratic Party is viewed more favorably by the young adults, however overall they are still split; 44 percent favorable to 43 percent unfavorable.

Trump ended his first year in office with an approval rating that is the lowest in modern polling for a president at this point in a term. Indeed just six of the past 12 presidents ever went as low or lower in approval as Trump is now.

An ABC News/Washington Post poll released earlier this month found that nearly half of Americans believe Trump is not mentally stable.

The poll comes amid growing concerns about Trump’s mental health following the publication of a book that focuses on his first year in office.

The book sheds light on concerns among top White House advisers about Trump’s psychological fitness to lead the nation.

In early December, Yale psychiatrist Dr. Bandy X. Lee gave a presentation to a dozen lawmakers on Capitol Hill, warning that Trump posed a "public health risk" by being in office.

Tags: US Trump
Short Link rasanews.ir/201pTS
Share
0
Please type in your comments in English.
The comments that contain insults or libel to individuals, ethnicities, or contradictions with the laws of the country and religious teachings will not be disclosed