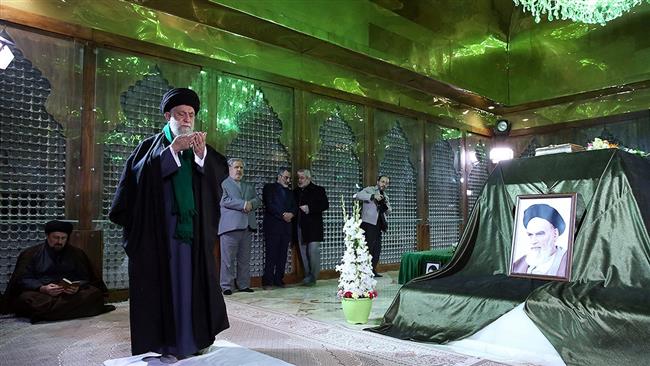 RNA - Ayatollah Khamenei visited the Imam Khomeini Mausoleum on Wednesday on the eve of the anniversary of the Imam’s return to Iran from forced exile by the country’s ousted monarchical Pahlavi regime in Paris in 1979.

The Leader then paid his respects to the Iranian martyrs who lost their lives in terrorist operations by the anti-Iran and anti-revolutionary Mujahedin-e Khalq Organization (MKO) and Iraq’s 1980-88 imposed war on the Islamic Republic as well as other martyrs.

Also on Wednesday, President Hassan Rouhani and his cabinet ministers similarly attended the mausoleum and the cemetery.

The Iranian chief executive renewed his allegiance with Imam Khomeini’s ideals and the martyrs.

Tags: leader Imam Khomeini
Short Link rasanews.ir/201pTM
Share
0
Please type in your comments in English.
The comments that contain insults or libel to individuals, ethnicities, or contradictions with the laws of the country and religious teachings will not be disclosed