The following is the final statement of the Syrian Congress of National Dialog, which was hosted by Russia in the resort city of Sochi on January 29 and 30, 2018, with delegates from the Syrian government and opposition in attendance: 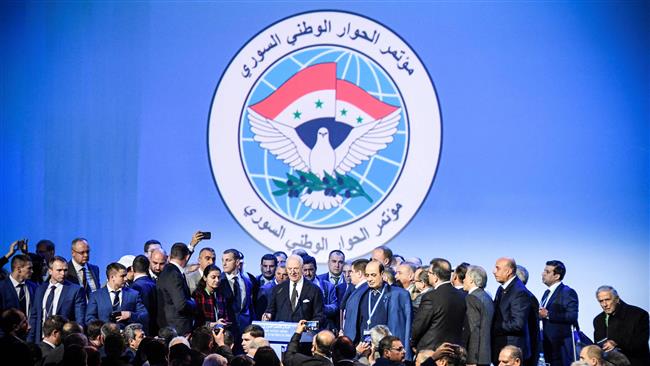 RNA - The following is the final statement of the Syrian Congress of National Dialog, which was hosted by Russia in the resort city of Sochi on January 29 and 30, 2018, with delegates from the Syrian government and opposition in attendance:

We, the delegates of the Congress of the Syrian national dialog, representing all segments of Syrian society, its political and civil powers, ethnic, confessional, and social groups, have assembled at the invitation of the friendly Russian Federation, in the city of Sochi, with the intention to put an end to seven years suffering of our people, through the achievement of a common understanding of the necessity for the salvation of our homeland from armed confrontation, social, and economic ruin, the restoration of its dignity on the regional and world stage, the provision of fundamental rights and liberties for all its citizens, and most importantly, the right to a peaceful and free life without violence and terror. The only way to achieve this particular goal is the political settlement of the problems of our homeland on the basis of the following principles:

1. Respect of and full commitment to the sovereignty, independence, territorial integrity, and unity of the [Syrian Arab Republic/state of Syria] as a land and a people. In this regard no part of the national territory shall be ceded. The people of Syria remain committed to the recovery of the occupied Syrian Golan by all lawful means in accordance with the UN Charter and international law;

2. Respect of and full commitment to Syria’s national sovereign equality and rights regarding non-intervention. Syria shall take its full role in the international community and the region, including as part of the Arab world, in conformity with the UN Charter, and its purposes and principles;

3. The Syrian people alone shall determine the future of their country by democratic means, through the ballot box, and shall have the exclusive right to choose their own political, economic, and social system without external pressure or interference, in line with Syria’s international rights and obligations;

4. The [Syrian Arab Republic/state of Syria] shall be a democratic and non-sectarian state based on political pluralism and equal citizenship irrespective of religion, ethnicity and gender, with full respect for and protection of the rule of law, the separation of powers, judicial independence, the full equality of all citizens, the cultural diversity of the Syrian society, and public freedoms, including freedom of belief, featuring transparent, inclusive, accountable, and answerable governance, including before the national law, with necessary effective measures to combat crime, corruption, and mismanagement;

5. A state committed to national unity, social peace, and comprehensive and balanced development with fair representation in local administration;

6. Continuity and improved performance of state and public institutions, with reforms where necessary, including the protection of public infrastructure and property rights and provision of public services to all citizens without discrimination, in accordance with the highest standards of good governance and gender equality. Citizens shall benefit from effective mechanisms in their relations with all public authorities in such a way as to ensure full compliance with the rule of law and human rights and private and public property rights;

7. A strong, unified, meritocratic and national army that carries out its duties in accordance with the constitution and the highest standards. Its functions are to protect the national boundaries and the people from external threats and terrorism, with intelligence and security institutions to maintain national security subject to the rule of law, acting according to the constitution and the law and respecting human rights. The use of force shall be the exclusive prerogative of competent state institutions;

8. Unqualified rejection of - and active commitment to combat - terrorism, fanaticism, extremism and sectarianism in all its forms and to tackle conditions conducive to their spread;

9. Respect and protection of human rights and public freedoms, especially in times of crisis, including non-discrimination and equal rights and opportunities for all without regard to race, religion, ethnicity, cultural or linguistic identity, gender or any other distinction, with effective mechanism for their protection, which give due regard to the political and equal rights and opportunities of women, including by the taking of active measures to ensure representation and participation in institutions and decision- making structures, with mechanisms aimed to achieve a level of representation of at least 30% for women, and the goal of parity;

10. A high value placed on Syria’s society and national identity, its history of diversity and the contributions and values that all religions, civilizations and traditions have brought to Syria, including the coexistence among its various components, along with the protection of the national cultural heritage of the nation and its diverse cultures;

11. Combatting and eliminating poverty and providing support for the elderly and other vulnerable groups, including persons with special needs, orphans and victims of war, which shall include ensuring the safety and refuge of all displaced persons and refugees, as well as protecting their right to voluntary and safe return to their homes and lands;

12. Preservation and protection of national heritage and the natural environment for future generations in accordance with environmental treaties and the UNESCO declaration concerning the intentional destruction of cultural heritage.

We, the representatives of the proud people of Syria, having lived through terrible misery and having found enough strength to fight against international terrorism, herewith declare our determination to restore the well-being and prosperity of our homeland and to make life decent and comfortable for each and every one of us.

To that end we agreed to form a constitutional committee comprising the Government of the Syrian Arab Republic delegation along with wide-represented opposition delegation for drafting of a constitutional reform as a contribution to the political settlement under the UN auspices in accordance with Security Council Resolution 2254.

The Constitutional Committee would at the very least comprise Government, Opposition representatives in the intra-Syrian talks, Syrian experts, civil society, independents, tribal leaders and women. Care would be taken to ensure adequate representation of Syria`s ethnic and religious components. Final agreement is to be reached in the UN-led Geneva process on the mandate and terms of reference, powers, rules of procedure, and selection criteria for the composition of the Constitutional Committee.

We appeal to the United Nations Secretary-General to assign the Special Envoy for Syria for the assistance of the Constitutional Committee work in Geneva.

Tags: Sochi Syria Russia
Short Link rasanews.ir/201pTJ
Share
0
Please type in your comments in English.
The comments that contain insults or libel to individuals, ethnicities, or contradictions with the laws of the country and religious teachings will not be disclosed