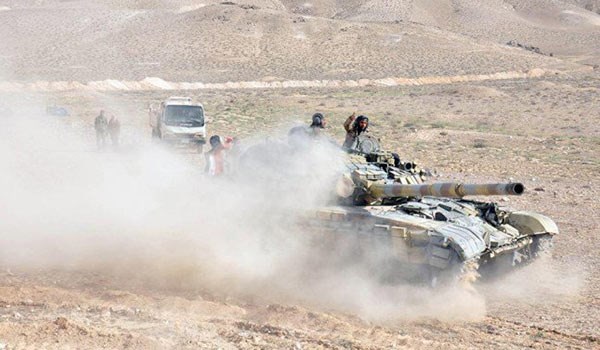 The Syrian troops killed tens of terrorists and injured dozens more in fierce clashes over controlling of strategic regions. They also destroyed military equipment of the terrorists.

The Syrian Army troops launched heavy attacks on ISIL's defense lines to capture a key military airport to move further towards the ISIL-Held town of Albu Kamal in Southeastern Deir Ezzur on Monday amid attempts by the US-backed Syrian Democratic Forces (SDF) to reach the town sooner than the government forces.

A military source confirmed that the army men kicked off a fresh operation to capture al-Thawra military airport Southwest of the town of Albu Kamal after the government forces drove ISIL out of T2 oil pumping station.

The source added that the army's next military objective after liberation of the airbase will be liberation of Albu Kamal at border with Iraq.

The army men stormed ISIL's positions in the neighborhoods of old airport, al-Hamidiyeh and al-Jabiliyeh after capturing the Stadium district and imposed control over more positions.

In the meantime, the Syrian Observatory for Human Rights reported that fifty terrorists were killed in the army operation and advances in Deir Ezzur city on Sunday night.

It added that at least 27 terrorist were killed on the Western bank of the Euphrates River.

The Syrian Army troops kicked off a fresh round of attacks to drive terrorists out of the strategic Abu Dali region at Hama-Idlib common border after seizing several regions in Northeastern Hama, military sources said Monday.

The sources said that the army men continued their advances against Al-Nusra Front (Tahrir al-Sham Hay'at or the Levant Liberation Board) in Northeastern Hama and captured the Syriatel and al-Zaferiyeh hills, marching towards Tal (hill) Khanzir and the hills of Tal al-Rayeh and al-Hamra.

The sources went on to say that the army has started liberation operation in Abu Dali after the artillery units pounded terrorists' positions in the towns of Abu Dali and al-Mosheirafeh.

In the meantime, militant-affiliated websites reported that several convoys of the Turkistani terrorist group with 400 gunmen entered Abu Dali to provide back up for Al-Nusra.

The Al-Nusra Front and the rival terrorist group of Faylaq al-Rahman engaged in a fresh round of clashes in Eastern Ghouta, local sources reported on Monday.

The sources said that Faylaq al-Rahman and Al-Nusra exchanged heavy fire in the town of Kafr Batna in the Central part of Eastern Ghouta.

Over 30 Al- Nusra terrorists, including Ens Abu Malik, Abu Abdullah Taftnaz and Nour al-Shami, were killed in fierce clashes between the army men and Al-Nusra near the villages of Khirbet Joy'ad, Tam al-Hawa and Abu Lefeh in Northeastern Hama.

Ens Abu Malik, Abu Abdullah Taftnaz and Nour al-Shami were among notorious field commanders of the Al-Nusra in Hama.

Tags: Damascus Syria ISIL
Short Link rasanews.ir/201p1v
Share
0
Please type in your comments in English.
The comments that contain insults or libel to individuals, ethnicities, or contradictions with the laws of the country and religious teachings will not be disclosed