Rasa - The Syrian army continued its military operations in the Northeastern part of Hama province and forced terrorists to retreat from more key regions. 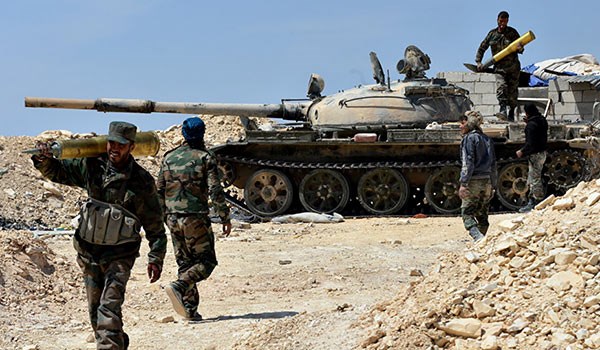 RNA - The army units also pushed back terrorists from the villages of al-Khafiyeh and Rasm Sawi in Northeastern Hama.

The Syrian troops killed tens of terrorists and injured dozens more in fierce clashes over controlling of strategic regions. They also destroyed military equipment of the terrorists.

The Syrian Army troops stormed the defense lines of the Al-Nusra Front (Tahrir al-Sham Hay'at or the Levant Liberation Board) in Northeastern Hama on Sunday and drove the terrorists out of two more villages.

The army men hit Al-Nusra positions hard along the road connecting the towns of Sheikh Hilal to Ithriya and captured the villages of al-Khafiyeh and Rasm Sawi.

In the meantime, dissident-affiliated websites reported that one of the media men of Al-Nusra working for Aba'a news website was killed in clashes with the army soldiers in the village of Jubb Abyaz.

The artillery units shelled heavily terrorists' movements from Tal Aswad region towards al-Sha'atha in Northern Hama and fended off their attack, killing all the invaders.

Also, the artillery units and aircraft targeted the positions of Jeish al-Izzah terrorist groups in the towns of al-Latamina, Kafr Zita and al-Zaka, killing a large number of terrorists and destroying their military hardware.

The Syrian Army troops launched an operation in Northeastern Hama on Saturday, forcing the Al-Nusra Front to retreat from two more regions.

The army men pushed Al-Nusra back from the villages of Tam al-Hawa and Abu Lefeh Northwest of Ithriya.

The Al-Nusra suffered heavy casualties in the attack.

Tens of Special Forces of the Syrian Army left their base in Northern Hasaka and arrived in Deir Ezzur to participate in a large-scale operation to end ISIL's presence in the Southeastern part of the province.

Over 300 soldiers left their base in Qamishli and deployed to the Deir Ezzur province in order to participate in the new phase of the military operation to liberate ISIL's vital stronghold of Albu kamal near the Iraqi border.

"The militants did not allow a UN convoy to pass, demanding 5,000 food packages, but were denied this," the source told Sputnik.

He added that the convoy was supposed to go to the town of Yalda, and then to Babbila and Beit Sahm.

"As far as we know, the militants set these conditions before (the convoy reached) Yalda," the source noted.

Another long convoy of the Turkish Army vehicles arrived in the Northwestern province of Idlib amid dispatches of more Ankara troops to Northwestern Idlib, dissident-affiliated websites reported.

The websites said that a long convoy of the Turkish army entered the town of Kafar Lusin in Northern Idlib.

The Syrian Army High Command announced that the pro-government forces were getting ready to launch a large-scale offensive to retake Idlib province from the terrorist groups.

According to the statement released by the military command, General Mohammad Khaddour would be leading the operation to retake the Abu al-Dhohour Airport in Eastern Idlib.

Tags: Terrorist Syria
Short Link rasanews.ir/201p1q
Share
0
Please type in your comments in English.
The comments that contain insults or libel to individuals, ethnicities, or contradictions with the laws of the country and religious teachings will not be disclosed