Rasa - For obvious reasons the Syrian government has rejected a bogus report sent to the United Nations Security Council that blamed it for a chemical attack on the opposition-held town of Khan Sheikhoun in April in which dozens of people were killed. 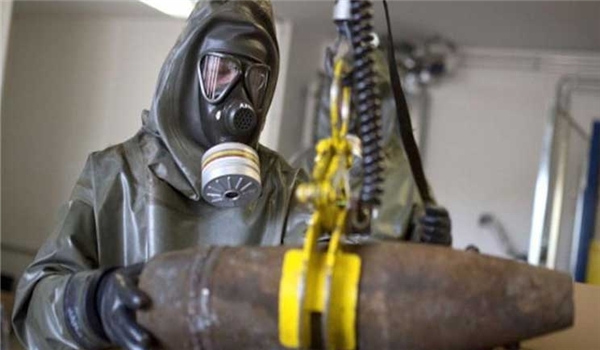 RNA - As maintained by Syrian government officials, the bogus report was compiled under instructions from the United States and other Western countries “to place more political pressure” on Syria. The report claims President Bashar Assad’s government was responsible for the release of Sarin at Khan Sheikhoun on April 4. The attack prompted an American missile strike against a Syrian air base that Washington claimed was used to launch the chemical attack.

It seems, however, more is at play here than meets the eye:

The War Party in Washington is escalating the ongoing war on Syria, and it is not stopping there. It is occupying once terror-held cities like Raqqa and it is busy building illegal bases throughout the country to ensure permanent occupation of the Arab country. For this, the US needs a pretext and what better than the recent UN Sarin attack report to justify the presence of its occupying forces there.

After all, the massive increase in US ground troops in post-ISIL Syria is part of the usual war for imperialism and greed, in the form of a large contingent of Special Forces being sent to the country’s northeast. To this end and after its embarrassing failure in regime changing Syira, the Pentagon says it has begun again with training what it calls “new rebel forces” for after ISIL has been dislodged from the rest of the country.

Regardless, what makes sense should be this: The Middle East region and its strategic resources are so important that even the British government has announced plans to return. It has already reopened its old colonial naval base in Bahrain. It has military bases in other parts of the Persian Gulf too. It has also announced plans to build new bases in the former British protectorate of Oman and beyond to re-establish its power east of the Suez Canal.

Indeed, the War Party generals should be out of their minds to call it quits in Syria. Unlike the Asia-Pacific region, the Middle East is a region of massive strategic resources, such as oil, gas and minerals, making it irreplaceable for many decades to come. For the US Military-Industrial Complex it is lucrative too, which is why it remains a key plank of the US strategy to pull countries in the region into its sphere of influence and global arms market, even those that are not on the same boat with Washington, including Syria and Iraq.

Though overshadowed by the so-called peace talks, the pivot to Syria and the Middle East remains very much underway. Already the US has expanded and established small military bases within the Syrian territory. It is building another one right outside Raqqa too. Because why not. The United Nations is looking the other way.

The powerful reality is that the UN has long been bullied by its most powerful and richest member, and UN secretaries-general (plus many member states) have always been forced to grit their teeth and take it quietly. This is yet another textbook example of what the world body has become so lately. The Americans offer a prime example of their criminality in Syria and the UN is more than happy to bury the underlying hypocrisy of its support.

Regardless, the world body needs to wake up to the real dangers that are facing the people of Syria. The UN has failed Syria. It is betraying its people in a time of great crisis. Through silence and complicity, or by taking part directly in the running propaganda war against Syria on the pretext of its non-existent chemical attack, some UN member states are also failing Syria, too timid and tradition-bound to warn of the terrible new dangers that the region is facing.

What post-ISIL Syria needs is a warning of the severe dangers that its people are facing, combined with an outline of the practical steps that are needed to avert these dangers, including an immediate end to the war and withdrawal of all US occupying troops. The fact that Washington has power to silence the UN and get off the hook from the scrutiny of its criminal actions must not be an excuse for despair and inaction. Instead, it should be a powerful reason for fighting back against Washington’s blackmail-style tactics, for working with courage and dedication to stop this never-ending insanity. The insanity that, despite common belief, started decades before Donald Trump was elected president.

Tags: US UN Syria
Short Link rasanews.ir/201p1m
Share
0
Please type in your comments in English.
The comments that contain insults or libel to individuals, ethnicities, or contradictions with the laws of the country and religious teachings will not be disclosed