Rasa - The leader of the Palestinian Islamic resistance movement, Hamas, said the Israeli regime was behind a “failed assassination attempt” on a senior Hamas official in the besieged Gaza Strip. 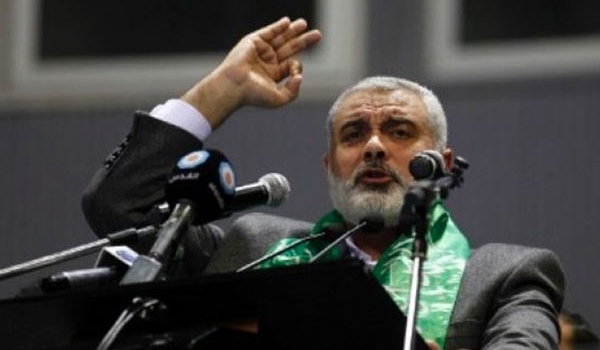 RNA - Ismail Haniyeh made the remarks as he visited Tawfiq Abu Na'im, director general of the internal security forces, at Dar al-Shifa Hospital in Gaza City on Friday, presstv reported.

“The Palestinian justice will punish those hands that carried out the attack and we believe that the Israeli occupying regime and its aides are responsible for this terrible crime,” the Hamas leader said.

Earlier in the day, Abu Na'im sustained moderate injuries after an explosion hit his vehicle. The blast reportedly occurred after he left Abu al-Hassan mosque, where he was performing Friday prayers.

A statement from Hamas' Interior Ministry said his car was blown up in the Nuseirat refugee camp. Several other people were also wounded in the bomb attack, it added.

“The security services immediately began investigations to discover the circumstances of the incident and to arrest the perpetrators,” the statement further said.

“It is wrong to believe that these crimes, whoever is behind them, can discourage us on our way towards liberating our lands,” Haniyeh said at the hospital, adding that Israel was unable to shatter the unity of Palestinians.

He also called on Palestinian Prime Minister Rami al-Hamdallah to do whatever is necessary to bring the perpetrators of the attack to justice.

The incident came about two weeks after Hamas and the West Bank-based rival Fatah movement, led by Palestinian President Mahmoud Abbas, signed a provisional unity agreement in the Egyptian capital Cairo, in which the former agreed to dissolve its administrative committee in Gaza to end a decade-long standoff between the two sides.

Fatah and Hamas have been at odds ever since the latter scored a landslide victory in parliamentary elections in 2006. Hamas governs the Gaza Strip while Fatah has set up offices in the West Bank.

Elsewhere in his remarks, Haniyeh called on Abbas to speed up the completion of Palestinian reconciliation based on the landmark deal.

Tags: Palestinian Israel ismail haniyeh
Short Link rasanews.ir/201p1H
Share
0
Please type in your comments in English.
The comments that contain insults or libel to individuals, ethnicities, or contradictions with the laws of the country and religious teachings will not be disclosed