Rasa - It is premature to get excited over the news that some US House lawmakers are supporting a bill to halt Washington’s military involvement in Saudi Arabia’s war against Yemen. 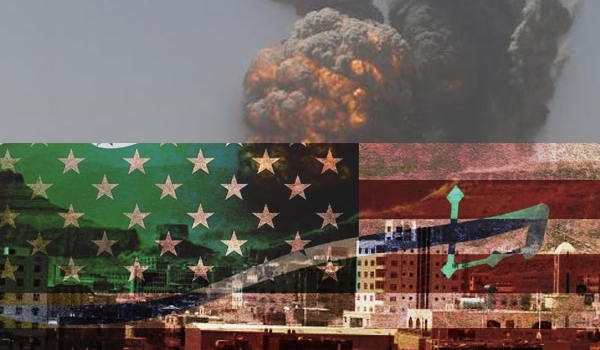 RNA - Although the bill requires the removal of US forces from the “unauthorized hostilities” in Yemen within 30 days under the War Powers Act, it will never happen, even if the measure reaches the floor for a vote. As maintained by the same lawmakers, the bill would not prevent the Pentagon regime from going after Al-Qaeda in the Arabian Peninsula and ISIL, which for the first time has established a foothold in Yemen. The bill would not end US drone strikes either, which in many cases target civilians in the war-ravaged country.

After all, the US is aiding and abetting the Saudi-led war that is designed to restore the ousted government of President Hadi to power - Riyadh’s own puppet. Hadi was overthrown after his term in office expired and fled the country after the resistance movement of Ansarullah took control of prominent parts of the country – including the capital Sana’a.

In more than two years, the illegal war has destroyed most of the country and claimed the lives of more than 12,000 people. The illegal war and the blockade also has led to an unprecedented cholera outbreak that has infected more than 700,000 people and displaced millions in what was already deemed the poorest country in the Middle East even before the war.

All this because Riyadh has the backing of Washington. The US support to the Saudis has consisted of providing arms and training, midair refueling for jets to conduct airstrikes, and offering targeting assistance to Saudi forces on the ground. Despite the claims to the contrary, the US-backed, Saudi-led airstrikes have killed many civilians, which makes the US as the main perpetrator of the bloodshed.

Into the argument, even if the anti-war bill were to get through Congress, it is unlikely that President Trump Donald will support it. Trump has applauded the Saudi monarchy for its atrocities in Yemen, and has consistently denounced Iran for attempting to spread its influence in the region. During his recent trip to Riyadh, Trump sold arms to Saudi Arabia worth over $100 billion. Meaning, the illegal war will continue apace - the House bill and the United Nations and human rights groups condemnations notwithstanding.

The US likewise will continue to promote war crimes and support the Saudis at the UN diplomatically. True, a new UN report might have included the Saudi coalition on a blacklist of child rights violators in the Secretary-General’s Annual Report on Children and Armed Conflict, but because of the US pressure it will go nowhere. The brunt of responsibility for the violence will never rest in the hands of the Saudis, let alone the Americans at the UN.

In accordance with international legitimacy and in accordance with International Law, however, this is a war of choice they have waged against the poorest country in the Arab world. The warmongers seek to annihilate Yemen to maintain regional status quo, and this could not be further from the truth. To this end, they were and still are ready to kill and maim as many civilians as possible, including women and children. They have no intention to stop the bloodshed and heed the international community’s call to end their aggression.

Per usual, the slain, as with anyone who gets killed in US drone strikes, will be labeled a “suspect.” The Pentagon regime will claim everyone being killed is a suspected member of Al-Qaeda in the Arabian Peninsula. The US Central Command will also issue their own usual rubber stamp of the strikes, claiming that everyone they kill are suspected members of ISIL – without offering any evidence.

Put simply, the US will continue to sponsor an appalling humanitarian catastrophe that, by some measures, is larger than the crisis in Syria. The Saudi-led coalition would be grounded if the War Party in Washington withheld its support. Yet all we have heard is crickets - beyond a couple boilerplate, lukewarm expressions of concern, and dodgy bills at the Congress.

Tags: US Yemen Saudi
Short Link rasanews.ir/201ol5
Share
0
Please type in your comments in English.
The comments that contain insults or libel to individuals, ethnicities, or contradictions with the laws of the country and religious teachings will not be disclosed