Trump allows release of some JFK files, blocks others under pressure

Rasa - US President Donald Trump has allowed the release of thousands of documents related to the assassination of former President John F. Kennedy (JFK) in November 1963, but delayed the publication of some "sensitive" files at the request of the Central Intelligence Agency (CIA). 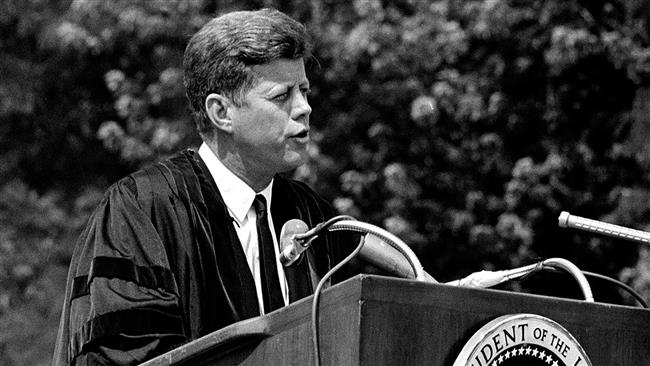 RNA - About 3,000 documents related to the JFK assassination are scheduled to be made public on Thursday by the National Archives. This is in compliance with the President John F. Kennedy Assassination Records Collection Act of 1992, which states that the federal government must release them by October 26, 2017.

Trump administration officials said the National Archives will publish the 2,800 records approved for release available on its website later on Thursday.

But the officials said the CIA, FBI and other agencies had asked the president to delay the release of some "sensitive" documents about the Kennedy assassination.

They said several agencies had requested that certain documents related to national security be held back.

Trump complied with the request and gave the agencies six months to give reasons for why the documents should not be declassified, they said.

"There does remain sensitive information in the records," an official said.

"The president wants to ensure that there is full transparency here," the official added, and "wants to get this information out as quickly as possible."

Trump had indicated he would not stand in the way and release the JFK murder files. "The long anticipated release of the #JFKFiles will take place tomorrow. So interesting!" he tweeted on Wednesday.

Last week, Trump said he would allow the release of classified documents about the assassination of Kennedy.

“Subject to the receipt of further information, I will be allowing, as President, the long blocked and classified JFK FILES to be opened,” Trump tweeted.

Trump’s tweet came after Politico Magazine reported that Trump administration and other government officials would block the release of specific information regarding Kennedy’s murder on Trump’s orders.

Trump administration officials told the publication that there were fears over releasing classified documents that were created in the 1990s, saying it could provide important information on recent intelligence and law enforcement operations.

Kennedy served as the 35th president of the United States from January 1961 until his assassination in November 22, 1963, in Dallas, Texas.

The President's Commission on the Assassination of Kennedy, known unofficially as the Warren Commission, was established by former President Lyndon B. Johnson in November 1963 to investigate the assassination of JFK.

However, many researchers are unconvinced by the official government account and argue that Oswald was part of a conspiracy to kill the charismatic 46-year-old president.

Tags: JFK CIA Trump
Short Link rasanews.ir/201oky
Share
0
Please type in your comments in English.
The comments that contain insults or libel to individuals, ethnicities, or contradictions with the laws of the country and religious teachings will not be disclosed