Rasa - President Hassan Rouhani has told Iraqi Prime Minister Haider al-Abadi in Tehran that Iran will continue its support for Baghdad's battle against terrorism and its efforts to boost national unity. 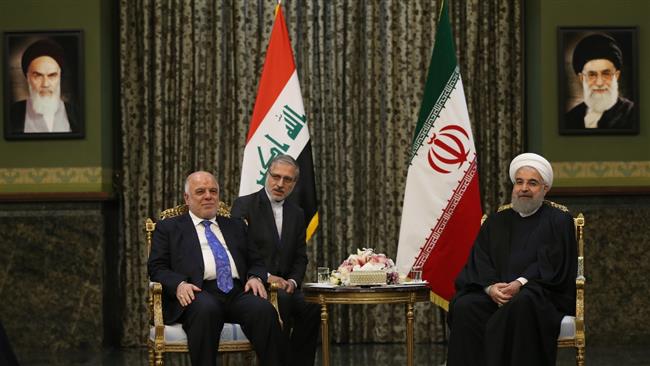 RNA - "The Islamic Republic of Iran, in the path of fighting terrorism, strengthening unity and solidarity in Iraq, and preserving the territorial integrity of the country, has always been and will be alongside the Iraqi government and nation," Rouhani said Thursday.

The Iranian president added that there was need to work towards rebuilding Iraq and developing its regional relations as the country was emerging from serious security issues and internal problems.

"The Islamic Republic of Iran, with all its capabilities and power, is ready to contribute to the reconstruction and development of Iraq and stand with its government and nation," Rouhani said.

The president stated that intimate contacts between Iran and Iraq and their consultations in order to develop and strengthen regional relations were important.

Iran, Rouhani noted, had never sought to dominate the region, but had always been at the forefront of the fight against regional terrorism as a major source of support for regional security.

"Today, we do not see any reason to continue disputes and tensions among the countries of the region," the president said.

Abadi traveled to Iran after visiting Saudi Arabia, Egypt, Jordan and Turkey, with mainstream Western media speculating that Riyadh and its allies were wooing Baghdad to Tehran's detriment.

The French news agency AFP said Sunday that Abadi's landmark meeting in Riyadh appeared to be aimed at boosting Saudi Arabia's clout in Iraq as part of a wider regional battle for influence that extends from Syria to Yemen.

Senior Iranian official, Hossein Amir-Abdollahian, however, indicated that Tehran was not worried about rapprochement between Saudi Arabia and Iraq, saying "the strategic relationship between Tehran and Baghdad is firm and lasting."

On Thursday, Rouhani said an immediate resolution of the regional crises, especially in Yemen where Saudi Arabia has been waging a destructive war for years, was important.

For his part, Abadi said terrorism and terrorist tendencies were a challenge and a threat to everyone, adding that the regional countries needed to put aside their differences and curb the spread of this menace.

"Disputes and conflicts provide conditions for the interference of others in the affairs of the countries of the region and we must take steps to resolve the disagreements and develop cooperation among them," he said, according to IRNA.

The Iraqi premier also stressed the need for Iran and Iraq to enhance their cooperation in various fields, saying, "By expanding our relations and cooperation, we must safeguard the interests of the two nations and create security and stability in the region."

Earlier on Thursday, Abadi met with Leader of the Islamic Revolution Ayatollah Seyyed Ali Khamenei who urged Iraq to remain vigilant in the face of American plots.

“The Americans created Daesh themselves, but now that the terrorists have been defeated by the Iraqi government and people, they pretend to be supportive of this important development,” Ayatollah Khamenei said, adding, “However, they will undoubtedly not hesitate to harm Iraq again if they find the opportunity."

Tags: Iran Iraq
Short Link rasanews.ir/201oks
Share
0
Please type in your comments in English.
The comments that contain insults or libel to individuals, ethnicities, or contradictions with the laws of the country and religious teachings will not be disclosed