Rasa - The Syrian army soldiers repelled terrorists' attack on their positions in Quneitra province after hours of clashes, inflicting major losses on them. 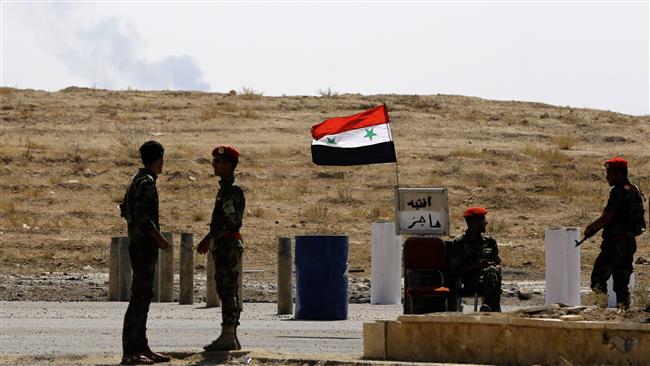 RNA - The terrorists' offensive to capture the government forces' positions in Quneitra province were fended off by the strong defense of the Syrian military men.

Meantime, the Syrian army and popular forces continued their military advances in other parts of Syria, including Deir Ezzur and Hama, over the past 24 hours.

The Syrian army forces repulsed terrorists' offensive against one of their military centers in Quneitra province, inflicting casualties on the militants.

The army units engaged in fierce clashes with the terrorists who had attacked a military point near the town of Hazar in the Northeastern parts of Quneitra province from Taranjeh region on Thursday.

They warded off the terrorists' offensive after inflicting a number of casualties on them.

The Syrian army units continued Valfajr 3 military operations to reach the town of Albu Kamal at the border with Iraq, regaining control of a strategic region.

The army forces engaged in heavy clashes with the ISIL terrorists in Southern Deir Ezzur on Thursday, imposing full control over the T2 pumping station.

During the clashes, the Syrian army soldiers killed and wounded a number of terrorists and destroyed their military equipment.

Given the strategic position of T2 station near the Syrian-Iraqi border, the region is considered as the army's start point to advance towards Albu Kamal.

The army soldiers are carrying out Valfajr 3 operation in Southwestern Deir Ezzur to reach the strategic ISIL-held town of Albu Kamal in the Southeastern part of the province.

A military source confirmed that a large number of terrorists were killed during the Wednesday operations.

The Syrian army started purging operations in Northeastern Hama as bloody clashes with the ISIL terrorists still continue in the region.

The Syrian army started operations from Ithriya-Wadi al-Zib front to regain control of Northeastern Hama, advancing 10km in the Northwestern parts of Ithriya.

Meantime, the army soldiers took back control of the villages of al-Shahatiyeh and Job Abyaz in Northeastern Hama during their operations.

They also won back control of a vast area in the Northern parts of Syriatel region in the North of al-Salamiyeh-Ithriya road.

The army has sent new military equipment and fresh forces to Northern Hama and Southeastern Idlib province in the past few days.

The Turkish army's fighter jets dropped leaflets over the town of Manbij in Northeastern Aleppo, warning of the Ankara-backed militants' imminent operation to take control of the region.

News websites affiliated to the terrorist groups reported that the Turkish air force has dropped the leaflets over Manbij to declare the Free Syrian Army (FSA)'s imminent operations to drive back the Kurdish forces from the region.

The Manbij residents were promised in the FSA-issued leaflets to witness purging their town from the Kurdish forces soon.

Manbij was captured from the ISIL by the Syrian Democratic Forces (SDF) in June 2016 after a two-month battle.

Following the Turkish military's intervention in Northern Syria, Turkey demanded that all Kurds in the Manbij region withdraw to the East of the Euphrates.

The town has constantly been a source of tension between the Turkey-led militants and the US-backed fighters.

Tags: Syria ISIL
Short Link rasanews.ir/201okr
Share
0
Please type in your comments in English.
The comments that contain insults or libel to individuals, ethnicities, or contradictions with the laws of the country and religious teachings will not be disclosed