Rasa - Leader of the Islamic Revolution Ayatollah Seyyed Ali Khamenei says Iran’s defense might is not up for negotiation, stressing the country’s resolve to strengthen its defense capabilities despite enemy attempts to weaken the nation. 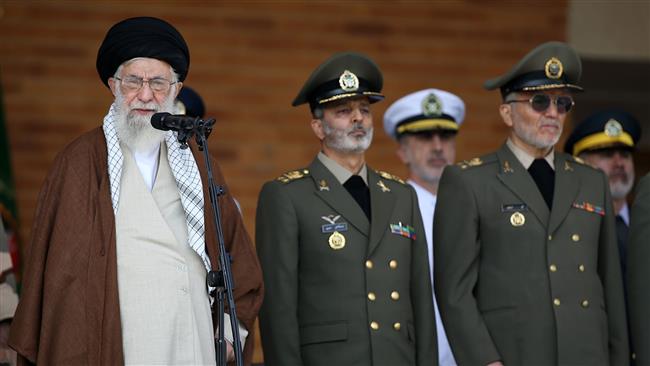 RNA - Ayatollah Khamenei made the remarks at a graduation ceremony for Iran’s Army cadets in Tehran on Wednesday.

“We have repeatedly announced, and declare once more that the country’s defensive means and power are not up for negotiation and bargaining,” the Leader stated.

“When it comes to defense equipment and whatever [means] that backs up the national power, we have no bargaining and transactions with the enemy, and will continue on the path of power with more strength than before,” he added.

Ayatollah Khamenei further highlighted the fury of hegemonic powers over Iran’s regional influence, saying the enemies view the elements of the Islamic Republic’s national power as “a nuisance” and work to undermine them.

The enemies, the Leader added, are opposed to Iran’s increasing might among countries in the region and beyond, describing that power as “the strategic depth of the Islamic establishment.”

Ayatollah Khamenei further described “reliance on the elements of national power” as the way to counter the enemies who are against a powerful Iran.

Tags: Iran Ayatollah Khamenei
Short Link rasanews.ir/201okN
Share
0
Please type in your comments in English.
The comments that contain insults or libel to individuals, ethnicities, or contradictions with the laws of the country and religious teachings will not be disclosed