Rasa - Deputy Permanent Representative of Iran to the UN Eshaq Al Habib blasted the Iranophobia scenario pursued by the West against the country's nuclear program, and said that the Israeli regime is causing the worst type of threat to the international security and stability. 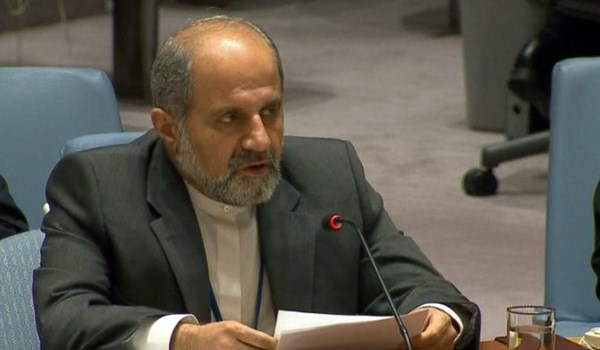 RNA - "The nuclear arsenal of the Israeli regime is capable to destroy the whole world," Al Habib said on Monday, addressing the First Committee of the United Nations General Assembly.

The Iranian ambassador’s speech focused on conventional weapons, and said, "As Iranian ballistic missiles are solely capable of carrying conventional warheads come under criticism by some countries, no criticism is made by the nuclear arsenal of the Israeli regime which is capable to destroy the entire world."

The full text of Al Habib's speech at the UN General Assembly's First Committee is as follows:

In the Name of God, the Most Compassionate, the Most Merciful

My delegation associates itself with the NAM statement delivered by Indonesia.

Iran reaffirms the inherent right of any State to acquire, manufacture, import and retain conventional arms and related parts, components and ammunition for its self-defense and security needs.

Iran shares the concerns over increasing global military expenditure. This is even more alarming in a region like the Middle East, where in addition to nuclear and other weapons of mass destruction, a large arsenal of sophisticated offensive conventional weapons of the Israeli regime continue to threaten the peace and security of the region and beyond.

In recent years, such an already complicated security situation in the Middle East has been exacerbated, including by manifold increase in the military budgets and arms imports, by certain States in the Persian Gulf. Only one example of this trend is the signing of a 110 billion dollar weapons deal by one of these countries with the US in 2017, which is yet separate from a ten-year, 350 billion dollar arms deal that this country signed separately with the US.

These are only the tip of the submerged iceberg of the security situation, military expenditure and arms import in a region where we live. Yet some countries are criticizing Iran for lunching only a handful of missiles that are strictly designed to carry only conventional warheads and are proportionate with its security environment.

Iran's missile program has been developed to meet its defense and security needs. It cannot and should not been seen and assessed in vacuum.

For instance, historically, during the war imposed on Iran by Saddam, not only did the United States and its regional allies provide military, intelligence, logistical, economic and political assistance to Saddam, and offer their support and maintained their silence during his chemical weapons attacks campaign, they also did everything in their power to interdict the acquisition of even the most basic defensive capabilities by Iran.

Through that experience Iran learned that in order to protect its people, safeguard its independence and security, and defend its national honor, it must rely on indigenous capacities; it learned that it should not hesitate in developing the capability to meet its legitimate defense and security needs.

As regards the current security environment in the Middle East, and at a time when the hostile policies of the United States and its regional allies, especially the Zionist regime, as well as the transfer of hundreds of billions of dollars worth of arms into the region have turned the region into a tinderbox, why should Iran remain complacent about its defense needs?

When the US allies in the region, whose combined population is far less than Iran, each spend exponentially higher sums on their military than Iran, why Iran — that has attacked no one in almost 300 years but has been the victim of aggression supported by the US and its regional partners — shouldn’t acquire necessary tools of deterrence in the face the constant threats by aggressors?

While the combined total military expenditure of the Middle East countries in 2016 showed a 19 per cent increase compared with 2007, Iran’s military expenditure decreased by 7.3 per cent during that period. This fact alone indicates how Iran exercises maximum restraint in reacting to skyrocketing security challenges in its region. This is also based on the understanding that our security can be achieved by our reliance on our people not by spending billions of dollars to import arms.

It is in this framework that Iran’s missile program has a purely defensive and deterrent character. These missiles are strictly designed to carry conventional warheads and their range and precision are proportionate to our security environment and threat perception.

It is based on these facts and understanding that Iran has always stressed that its missile program will continue with full force in accordance with its national defense program and is not, nor will it ever be, negotiable.

Therefore, arguments in support of inconsistency of such lunches with resolution 2231 are based on the wordings of resolution 1929, which was annulled and terminated by the Council itself in 2015 and therefore is not valid anymore. Making a comparison between the wordings of these two resolutions is recommended for having a better and clear understating of the context of this subject.

Tags: Iran UN Israel
Short Link rasanews.ir/201ojx
Share
0
Please type in your comments in English.
The comments that contain insults or libel to individuals, ethnicities, or contradictions with the laws of the country and religious teachings will not be disclosed