Rasa - A monitoring group says Daesh slew at least 128 civilians in a central Syrian town before the government won back its control from the Takfiri terrorist group. 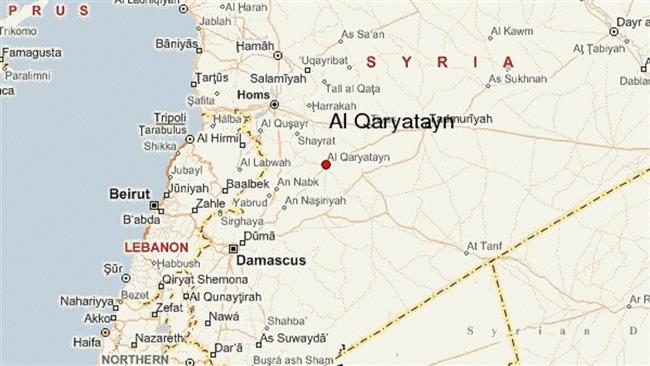 RNA - The Syrian army recaptured Qaryatayn in central Homs on Saturday "after eliminating terrorist Daesh groups that had infiltrated it" earlier in the month.

According to the so-called Syrian Observatory for Human Rights on Monday, Daesh went on a spree of carnage over a three-week period against the town's residents, accusing them of collaboration with government forces.

At least 83 people were killed in the 48 hours before the Army retook the town, the London-based monitor said.

The town lies nearly 300 km from the oil-rich Dayr al-Zawr city in the east, which is currently the focus of a government offensive to retake it from Daesh.

The head of the Observatory, Rami Abdurrahman, said what happened in the town was a "massacre."

At least 35 were reportedly found shot and dumped into a deep shaft, while the rest were found in the town's streets.

According to the monitor which documented the killings, the number of the victims is likely to rise.

Syrian troops regained control of Qaryatayn in April 2016 but Daesh launched a new attack on the town in late September and recaptured it.

At the time, Russia which helps the Syrian government in the fight, accused the United States of looking the other way and allowing Daesh to attack Qaryatayn.

Most of Daesh militants who were involved in the attacks on the town were reportedly local residents, with government media blaming the loss on militant "sleeper cells."

Tags: DAESH Syria
Short Link rasanews.ir/201ojh
Share
0
Please type in your comments in English.
The comments that contain insults or libel to individuals, ethnicities, or contradictions with the laws of the country and religious teachings will not be disclosed