Rasa - The Palestinian resistance movement Hamas has stressed that it will never sever ties with Iran as prerequisite for talks with the Tel Aviv regime. 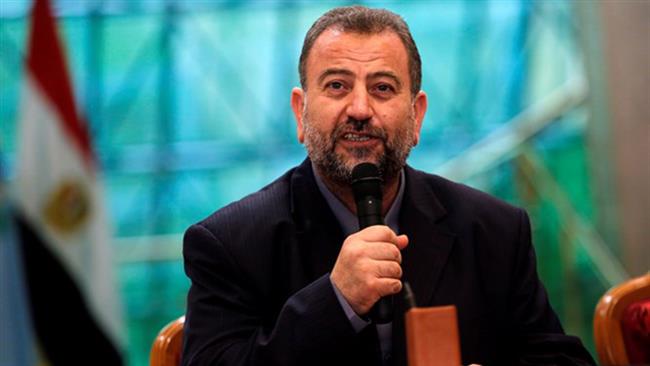 RNA - Hamas's deputy leader Saleh al-Aruri made the remarks in a statement released on Saturday.

Aruri noted that Israel had set three preconditions for the beginning of negotiations, including the disarmament of Hamas, recognition of Israel, and severing ties with Iran.

"In response to the first prerequisite that was disarmament of Hamas, we have declared that we don’t accept it at all," he said, adding that they also totally reject the second condition of recognizing Israel.

"Our presence in Iran is the practical denial of the third precondition that was cutting ties with Iran," Aruri stressed.

Aruri is leading a high-ranking Hamas delegation which arrived in Tehran on Friday for talks with Iranian officials including Ali Akbar Velayati, a senior adviser to Leader of the Islamic Revolution Ayatollah Seyyed Ali Khamenei.

On Thursday, the head of Hamas said that "no one" can force it to disarm or recognize Israel after the US demanded the resistance movement meet those conditions as part of an emerging Palestinian unity government.

"No one in the universe can disarm us. On the contrary, we will continue to have the power to protect our citizens," Yahya Sinwar said. "No one has the ability to extract from us recognition of the occupation," he added.

Israeli Prime Minister Benjamin Netanyahu’s cabinet said in a statement on Tuesday that Tel Aviv would not engage in negotiations with a future Palestinian unity government that had the backing of Hamas.

Both Hamas and its Ramallah-based rival Fatah were quick to brush off Netanyahu’s threats, with the Palestinian Authority saying such a hostile stance would not affect the nation’s resolve to pursue its goals.

Tags: Hamas Iran
Short Link rasanews.ir/201oja
Share
0
Please type in your comments in English.
The comments that contain insults or libel to individuals, ethnicities, or contradictions with the laws of the country and religious teachings will not be disclosed