Israeli Police Round up Over 50 Palestinians in East Jerusalem

Rasa - The Israeli police detained more than 50 Palestinians in an overnight large-scale campaign in the neighborhood of Issawiyeh in occupied East Jerusalem, local sources and Israeli police said on Monday. 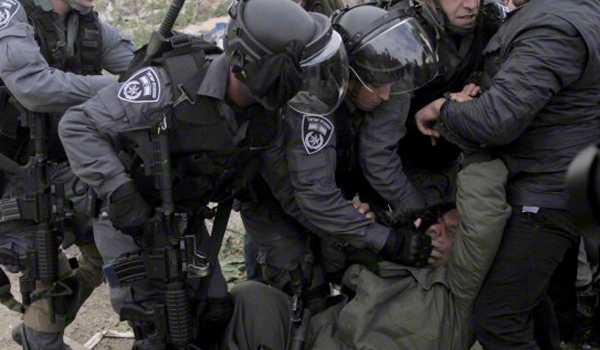 He said a large force supported by a helicopter flying overhead raided the neighborhood after midnight from all entrances and broke into homes causing panic and fear among residents.

Mohammad Mahmoud, an attorney with Wadi Hilweh Information Center specialized in defending minors, said most of those detained were taken to several police stations and interrogation centers in Jerusalem.

He said he was able to visit most of those detained, who were all teenagers ranging in age between 15 and 18 years old. Police is charging them with throwing stones at Israeli targets in the neighborhood, he said.

Israeli police confirmed the campaign and said 51 Palestinians were detained claiming they were involved in stone-throwing incidents at Israeli police.

The neighborhood residents have recently complained of police brutality and harassment of students that left a number of them injured including one who had to undergo surgery to remove his spleen after he was shot by a rubber-coated metal bullet fired by the police.

Tags: Palestinian Israel
Short Link rasanews.ir/201ojX
Share
0
Please type in your comments in English.
The comments that contain insults or libel to individuals, ethnicities, or contradictions with the laws of the country and religious teachings will not be disclosed