Rasa - Iranian President Hassan Rouhani underlined that Tehran does not allow any country to express views and demand talks about its military power. 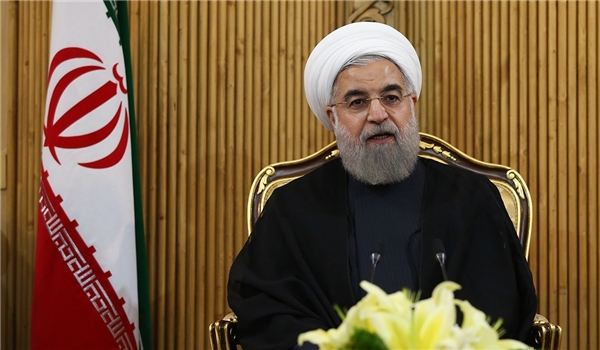 RNA - "Iran's weapons are similar to all other world states. We have international rules and the constitution which says that our military power should be deterrent and we don’t want anything else," President Rouhani said, addressing a ceremony in Tehran on Monday.

Noting that Iran will defend itself if necessary, he said, "No one can speak of our military power which is based on the constitution and the defense doctrine."

President Rouhani reminded the year between 1980 to 1988 during which Iraq had imposed a war on Iran, and said the western powers and other countries refrained from supplying Tehran with weapons to defend itself.

In relevant remarks on Saturday, Deputy Chief of Staff and Spokesman of Iran's Armed Forces Brigadier General Massoud Jazzayeri warned European states to avoid meddling with his country's missile program and presence in the region.

"As the Islamic Republic of Iran has stated before, it does not accept to negotiate over its missile issues," General Jazzayeri said.

"We, as the Armed Forces, are against any talks with the foreign sides on this issue," he added.

The General said there is no convention or agreement on missile production and development, and added, "Therefore, we strictly advise and notify all sides to stay away from this issue."

He also dismissed the US and certain European states' demands for talks on the regional issues, specially Syria, and said such demands are "illegal" and "illegitimate".

Tags: Iran Rouhani
Short Link rasanews.ir/201ojR
Share
0
Please type in your comments in English.
The comments that contain insults or libel to individuals, ethnicities, or contradictions with the laws of the country and religious teachings will not be disclosed