Rasa - Chief of Staff of the Iranian Armed Forces Major General Mohammad Hossein Baqeri and his Syrian counterpart General Abdullah Ayoub signed a memorandum of understanding (MoU) in Damascus to broaden defense and military cooperation between the two countries. 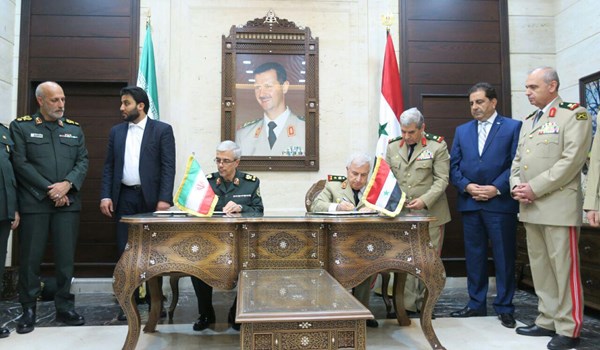 RNA - General Baqeri and General Ayoub signed the MoU in the Syrian capital on Friday at the end of General Baqeri's visit to Syria.

General Baqeri told reporters after signing the MoU that the agreement emphasizes development of military cooperation in various dimensions such as education, operation, logistics and intelligence.

Baqeri, heading a high-ranking delegation, left Tehran for Damascus late on Tuesday and met Defense Minister Major General Fahd Jassem al-Freij during his trip to the war-torn country on Wednesday.

Iran, along with Russia, has a military advisory mission in Syria aimed at strengthening its army on the battlefield against terrorism. Moscow has also been providing air cover to Syria’s ground offensives. Syrian forces are also receiving assistance from fighters of Lebanon’s Hezbollah resistance movement.

Backed by their allies, Syrian government forces have managed to deal heavy blows to terrorist groups, which have been wreaking havoc on the Arab nation since early 2011.

Tags: Iran Terrorist Syria
Short Link rasanews.ir/201oii
Share
0
Please type in your comments in English.
The comments that contain insults or libel to individuals, ethnicities, or contradictions with the laws of the country and religious teachings will not be disclosed