'No one' can force Hamas to disarm or recognize Israel

Rasa - The head of Hamas says "no one" can force it to disarm or recognize Israel after the US demanded the resistance movement meet those conditions as part of an emerging Palestinian unity government. 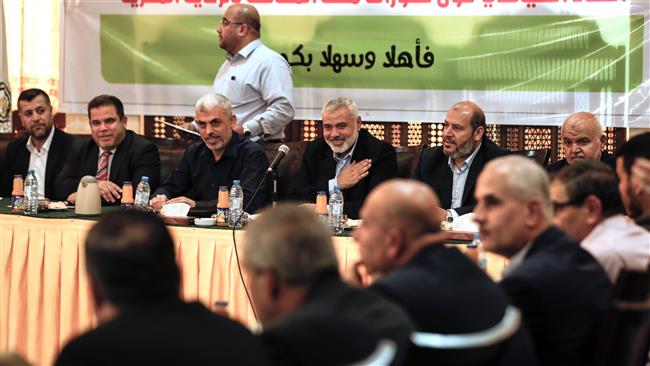 RNA - "No one in the universe can disarm us. On the contrary, we will continue to have the power to protect our citizens," Yahya Sinwar said on Thursday. "No one has the ability to extract from us recognition of the occupation," he added.

“It is the right of our people to choose its government according to their supreme strategic interests,” he said.

Netanyahu’s cabinet said in a statement on Tuesday that Tel Aviv would not engage in negotiations with a future Palestinian unity government that had the backing of Hamas.

Both Hamas and its Ramallah-based rival Fatah were quick to brush off Netanyahu’s threats, with the Palestinian Authority saying such a hostile stance would not affect the nation’s resolve to pursue its goals.

Fatah, led by Palestinian Authority chief Mahmoud Abbas, and Hamas have been at odds ever since the latter scored a landslide victory in parliamentary elections in 2006. Hamas governs the Gaza Strip while Fatah has set up offices in the West Bank.

Last week, however, Fatah and Hamas signed a provisional unity agreement in the Egyptian capital, Cairo, in which the latter agreed to dissolve its administrative committee in Gaza.

The ongoing negotiations are taking place within the framework of a 2011 agreement between the two sides, under which 3,000 Fatah security officers would join a Gaza police force over the course of a year.

Under that deal, Hamas’ 25,000-strong armed wing, Ezzedine al-Qassam, which has defended Gaza against three deadly Israeli wars over the past decade, would maintain its position.

Tags: Hamas Gaza
Short Link rasanews.ir/201oiG
Share
0
Please type in your comments in English.
The comments that contain insults or libel to individuals, ethnicities, or contradictions with the laws of the country and religious teachings will not be disclosed