Global support for JCPOA big victory for Iran against US

Rasa - Lebanese President Michel Aoun says the international community’s support for the Iran nuclear deal in the face of US President Donald Trump’s policies is a great political victory for Tehran and global diplomacy. 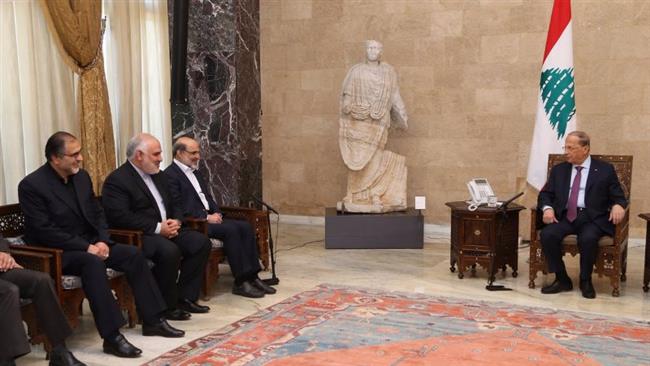 RNA - The Lebanese president made the remarks in a meeting with the head of the Islamic Republic of Iran Broadcasting (IRIB), Abdolali Ali-Asgari, in Beirut on Wednesday, IRNA reported.

Aoun said that Tehran’s sensible policies vis-à-vis the Iran deal, known as the Joint Comprehensive Plan of Action (JCPOA), has pitted the US against European countries.

The Lebanese president expressed optimism that Iran’s constructive role in the region would contribute to further progress in Syria’s political process and return of Syrian refugees to their country.

The IRIB head, for his part, lauded recent victories of the Lebanese army and the Hezbollah resistance movement against Takfiri terrorists.

In vituperative comments on Friday, the US president refused to certify Tehran’s compliance with the JCPOA. Trump also accused Iran of aggression against the American people, sponsoring terror and destabilizing the Middle East and other parts of the world.

Trump’s latest harsh remarks against Iran have prompted reactions both inside and outside the US.

The European allies of the US involved in the negotiations that led to the 2015 landmark nuclear deal have remained adamant that the agreement should remain in force.

The EU foreign policy chief, Federica Mogherini, said this week that she would be traveling to Washington in November to reaffirm Europe’s message on the deal.

After a Friday closed-door meeting chaired by Mogherini on Iran, the EU ministers also issued a joint statement in support of the JCPOA.

“The EU is committed to the continued full and effective implementation of all parts of the JCPOA,” read part of the statement.

A number of American lawmakers have also criticized Trump’s move as a mistake that did not serve the interests of the US.

House Minority Leader Nancy Pelosi has called Trump's decision not to recertify the Iran nuclear agreement a "grave mistake", and argued that the Iranians are in compliance with the nuclear agreement.

Meanwhile, Iran has vehemently rejected the possibility of renegotiating the deal, warning that any hostile action against the JCPOA will jeopardize regional and global peace and security.

Tags: Iran JCPOA Lebanon
Short Link rasanews.ir/201oi3
Share
0
Please type in your comments in English.
The comments that contain insults or libel to individuals, ethnicities, or contradictions with the laws of the country and religious teachings will not be disclosed