Rasa - Human Rights Watch (HRW) says nearly 300 villages of the persecuted Rohingya Muslim minority have been burned in Myanmar since the outbreak of the latest military offensive in restive Rakhine state. 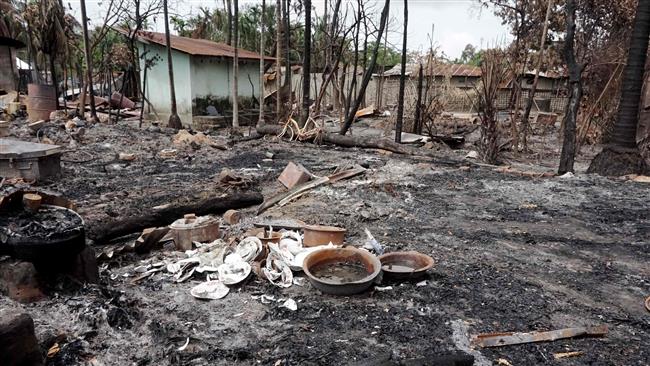 RNA - At least 288 villages in Rakhine have been partially or totally destroyed by fire since August 25, the HRW reported, according to information gathered on satellite images.

According to the HRW, the greatest damage occurred in Maungdaw township, which accounted for some 90 percent of the areas where destruction happened between August 25 and September 25.

Phil Robertson, deputy Asia director for the HRW, said in a statement that the army had committed numerous crimes during the crackdown across the violence-hit region.

"The Burmese military destroyed hundreds of Rohingya villages while committing killings, rapes, and other crimes against humanity that forced Rohingya to flee for their lives," said Robertson.

"These latest satellite images show why over half a million Rohingya fled to Bangladesh in just four weeks."

The United Nations said on Tuesday some 582,000 Rohingya refugees had fled their homes in Myanmar and arrived in Bangladesh since late August. The world body also warned that thousands more were stranded at the border.

The unprecedented influx of refugees has put immense pressure on Bangladeshi authorities and charities. They have described the crisis as one of the world's most pressing humanitarian emergencies.

Myanmar has long faced international criticism for its treatment of Rohingya Muslims, who are denied citizenship and live in conditions rights groups have compared to those of the Blacks under the former apartheid regime in South Africa.

Tags: HRW Rohingya Rohingya Myanmar
Short Link rasanews.ir/201ohH
Share
0
Please type in your comments in English.
The comments that contain insults or libel to individuals, ethnicities, or contradictions with the laws of the country and religious teachings will not be disclosed