Iraqi forces reestablish security in Kirkuk after pushing out Kurds

RNA - Iraqi government forces have established security over the northern city of Kirkuk after retaking contested territory from Kurdish militants. 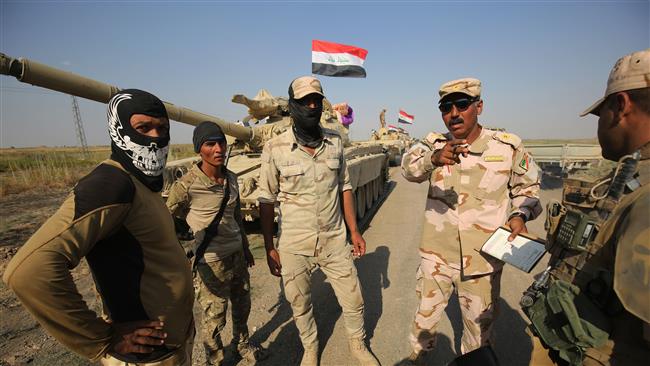 RNA - Police have called on the residents, who had fled in their thousands for fear of a potential armed confrontation, to return, giving assurances that the situation is stable. The city is now under a night-time curfew.

Cited by Reuters, an Iraqi army officer said government forces had also taken control of all oilfields operated by the North Oil Company in the province.

Kurdish forces have been holding parts of Iraqi territory since 2014, when Daesh began an offensive across Iraq and the Kurds began fighting it and overrunning territory in the process.

The Baghdad government has long insisted that the Kurds pull out of the territories they had overrun. But the Kurdish militants have refused. Ever since a controversial referendum on secession in Iraqi Kurdistan on September 25, the Iraqi government has lost patience, sending security forces to retake Kurdish-held areas.

Baghdad also ordered the Kurdistan region to swiftly hand over its border crossings and airports. The region refused and later sent thousands of Peshmerga and other militants to Kirkuk Province, which it has been claiming in its entirety for long.

Prime Minister Haider al-Abadi has ordered that national flags be hoisted on public buildings in all of Kirkuk’s neighborhoods.

Crowds on the streets of Kirkuk’s southern outskirts welcomed army forces as they entered the city.

The Peshmerga have called the takeover “a flagrant declaration of war” and vowed that Iraq will pay a “heavy price.”

Meanwhile, Kurdish Peshmerga forces pulled out from the area of Khanaqin, on the border with Iran, as Iraqi forces prepared to take over their positions, security sources said. A small oil field, Khana, is located in the area.

Meanwhile, Iraqi army and Hashd al-Sha’bi forces have taken control of the city of Sinjar in Nineveh Province following a pullout by Kurdish militants.

Government forces took control of all of Sinjar on Tuesday after the withdrawal a day earlier of Kurdish Peshmerga militants.

The Peshmerga militants also left the towns of Bashiqa and Bahzani in Nineveh.

Kurds clash with police in London

Separately, Kurdish separatists have clashed with police in front of Iraq’s Embassy in London.

Iraq’s Foreign Ministry reacted by saying that the protesters had engaged in “criminal” activity and demanding that the UK investigate them.

Following the referendum, Iraq demanded neighbors Iran and Turkey to close their respective borders with Kurdistan.

Iran closed its airspace with Iraqi Kurdistan at the time, and on Monday, Faramarz Akbari, the governor of Qasr-e-Shirin, said Iran had since a day earlier temporarily closed its Parviz Khan Border Crossing in Kermanshah Province, which borders Iraq's Kurdistan.

He said it would likely remain closed until Iraqi security forces replace the Kurdish militants on the borders.

This is the first time an Iranian official has confirmed the closure of a land border with Iraq's Kurdish region.

Tags: Iran Kurd Iraq
Short Link rasanews.ir/201oh8
Share
0
Please type in your comments in English.
The comments that contain insults or libel to individuals, ethnicities, or contradictions with the laws of the country and religious teachings will not be disclosed