Rasa - The office of the Interests Section of the Islamic Republic of Iran has been attacked in Washington hours after US President Donald Trump’s vicious speech against the country. 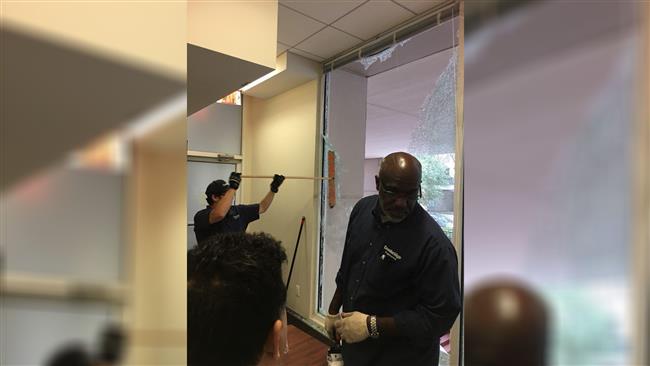 RNA - Unknown assailants attacked the Iranian diplomatic office with rocks and an air gun in the early hours of Saturday, IRNA reported.

The office’s head, Mehdi Atefat, said windows were broken and some bullets had penetrated into the building.

Some slogans were also written on the building’s walls. Atefat said the trail of newly-emerging cults hostile to the Islamic Republic could be seen in the graffiti.

The US president announced his review of the United States’ policy on Iran on Friday, in which he said he would not certify Iran's nuclear deal, known as the Joint Comprehensive Plan of Action (JCPOA), with the US, Britain, France, Russia, China and Germany.

Apart from his refusal to certify the JCPOA, Trump also warned that he might ultimately terminate the deal, in defiance of other world powers and undermining a landmark victory of multilateral diplomacy.

While Trump did not pull Washington out of the nuclear deal, he gave the US Congress 60 days to decide whether to reimpose economic sanctions against Tehran that were lifted under the pact. Reimposing sanctions would put the US at odds with other signatories to the accord and the European Union.

During his speech, the American businessman-turned-politician also said he was authorizing the US Treasury Department to impose further sanctions on “the entire” Islamic Revolution Guards Corps (IRGC) for what he claimed was “its support for terrorism.”

Iranian President Hassan Rouhani slammed Trump’s speech against the Islamic Republic as nothing more than insults and delirious talk, urging the US president to brush up on his world history and geography to improve his understanding of international obligations and global ethics, etiquette and conventions.

The Western allies of the US, including the EU, as well as Russia criticized Trump’s speech and reaffirmed their commitment to the JCPOA.

Iran’s Foreign Minister Mohammad Javad Zarif on Saturday slammed the move by the US Treasury Department to blacklist the IRGC, saying Iranian people from all walks of life strongly support the defenders of the country and the region against terrorism.

He added that the Iranian people are “standing firm with those who defend us & the region against aggression & terror.”

Tags: US Iran
Short Link rasanews.ir/201ogG
Share
0
Please type in your comments in English.
The comments that contain insults or libel to individuals, ethnicities, or contradictions with the laws of the country and religious teachings will not be disclosed