Afghans Must Resist the Longest Military Aggression in US History 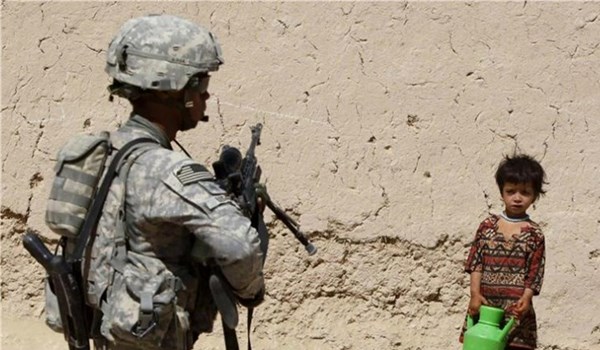 RNA - Karzai is very critical in particular of President Trump’s policy centering on criticizing Pakistan while encouraging India to be more heavily involved in Afghanistan, saying a plan to sew regional disharmony isn’t a realistic way to win the Afghan conflict – the longest war in US history.

He warns, “If they genuinely want to fight extremism and terrorism, they cannot do it by creating rivalry here in this region. They are just adding to the number of different conflicts Afghans are going to be stuck with.

That Trump’s strategy is making Afghanistan a more direct part of the region’s biggest conflict is beyond dispute. What’s not clear is the question of whether continuing and outsourcing the war is also going to benefit the people of Afghanistan - as the Trump regime would like to suggest:

- The current or potential future terrorist threat does in no way justify continuing the illegal war on Afghanistan, where the Taliban and now ISIL are going from strength-to-strength. The strategy developed to turn things around, which includes increasing the number of US forces by several thousand, is far from perfect. They have only managed to kill more civilians along the way with no tangible results on the ground.

- Aggressively pursuing a peace deal with the Taliban or simply playing for time are also unappealing options. As bad as these and other possible options are, however, one is far worse: hiring mercenaries to do the job of US occupying troops. The plan is for 5,500 private contractors to take over the murder mission. According to the Pentagon regime, the plan will also include a ninety-plane private air force to provide air support to these mercenaries. At best, outsourcing the war effort would save some money for the Pentagon regime. But there are other costs that would be damaging to Afghan interests, including the civilian costs.

- The contracted force would be no more effective than the current Operation Resolute Support and there are plenty of reasons why it likely would be worse. The evidence from Afghanistan and Iraq indicates that contractors fared no better than troops when it came to targeting terrorists, much less avoiding civilian casualties. Since they operate outside of the military chain of command, it is much harder to hold them accountable – not that the Pentagon regime has ever held to account its own troops when they committed crimes in Iraq and Afghanistan.

- The fact that tens of thousands of innocent civilians have been killed in Afghanistan is an argument for ending the war. There is a tendency at present to exploit the fact that the Taliban and ISIL are going from strength-to-strength as a means of advancing the US-led campaign, but of not trying to stop it. The death toll is, by the standard of most wars, a high number. In themselves, they make it clear that continuation of the war is wrong.

It is, therefore, a bad idea for President Trump to escalate the conflict at this particular point in time. His timing, though not his content, has been tacitly rebuked by many US generals, politicians and even NATO allies. In the second place, Trump is wrong about public attitudes. This is not a well-run war, and people don’t see their side's deaths as arguments for victory, because they focus on what the fighting is for. In Afghanistan, the US and company are fighting for influence and not for values, and certainly not for the unfortunate people living there.

The strongest argument against the war is this: If it is not necessary, then it is unnecessary, and unnecessary war is immoral. The Trump White House and the alliance are free to escalate this immoral fight and congratulate themselves along the way, but they are wrong to assume that if they push much harder they can sustain the whole thing for victory.

It is about time for the warmongers to let the Afghan issue go to sleep politically. They cannot win the war even if they push much harder and challenge their anti-war opponents much more fiercely. They have experienced the first defeat of the most powerful military alliance in history at the hands of a small band of fanatics armed with little more than rifles and IEDs. This immoral fight is seen all over the world as a battle for regional influence and control, not between values.

Tags: US Afghan
Short Link rasanews.ir/201ogD
Share
0
Please type in your comments in English.
The comments that contain insults or libel to individuals, ethnicities, or contradictions with the laws of the country and religious teachings will not be disclosed