Afghan civilian casualties in airstrikes up 50% 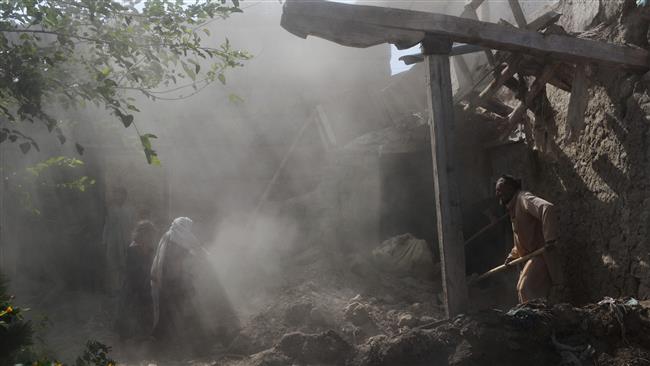 RNA - UN investigators said in a quarterly report on Thursday that as of the end of September, at least 205 civilians had been killed and 261 wounded this year in airstrikes in Afghanistan.

According to the report, over two thirds of the civilian victims were women and children.

At least 38 percent of those casualties were caused by the US, while the rest was attributed to the Afghan air force, which has begun to conduct more attacks on its own in recent months.

The report comes as US troops increase attacks in Afghanistan under a new strategy announced by President Donald Trump in August.

The high civilian casualties have further raised doubts among Afghans about the US strategy in Afghanistan and whether it will be successful.

In September, US warplanes dropped more bombs than in any single month since 2010. The growing number of aerial raids was driven largely by Trump's strategy of trying to purportedly reassert pressure on militants.

Reacting to the findings, General Dawlat Waziri, spokesman for the Afghan ministry of defense, said the government took civilian casualties seriously. "It is quite obvious that Taliban and other insurgent groups cause more civilian casualties."

He said insurgents also "use civilians as human shields and hide in residential areas."

Tadamichi Yamamoto, the head of the UN mission in Afghanistan, praised the Kabul government for formally endorsing a national policy designed to reduce civilian casualties.

"The government owes it to its citizens, particularly the victims of the armed conflict, to ensure full implementation of the policy through a concrete action plan," Yamamoto said.

According to the UN, pro-government forces were responsible for 20 percent overall, while the remainder was attributed to joint fighting or unidentified groups,

The United States currently has about 8,400 soldiers in Afghanistan, with NATO troops totaling another 5000.

Civilian casualties caused by NATO forces have been one of the most contentious issues during the 16-year military campaign in Afghanistan, prompting strong government and public criticism.

Afghanistan is still suffering from insecurity and violence years after the United States and its allies invaded the country as part of Washington’s so-called war on terror. The military invasion removed the Taliban from power, but the militancy continues to this day.

The war in Afghanistan is the longest in US history with a cost of about $1 trillion. More than 2,400 Americans have died and another 20,000 have been wounded since the invasion in 2001.

Tags: US Afghan UN
Short Link rasanews.ir/201of6
Share
0
Please type in your comments in English.
The comments that contain insults or libel to individuals, ethnicities, or contradictions with the laws of the country and religious teachings will not be disclosed