Rasa - Palestinian resistance movement Hamas says it has reached a national reconciliation deal with rival party Fatah with the aim of ending a decade-long political rift mainly over the governance of the Gaza Strip. 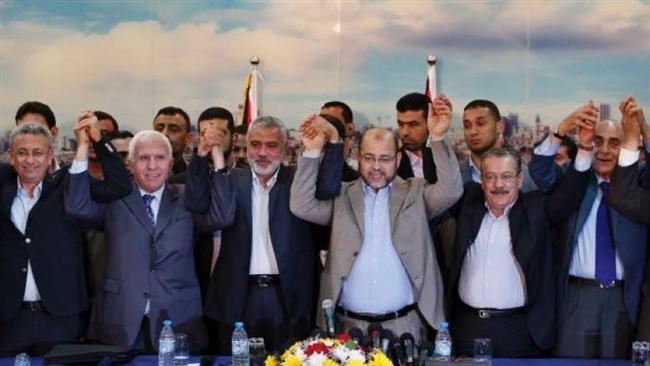 RNA - “Fatah and Hamas reached an agreement at dawn today upon a generous Egyptian sponsorship,” the Gaza-based resistance movement’s chief Ismail Haniyeh said in a statement on Thursday.

He did not elaborate on the deal, but Reuters cited a Hamas official as saying that the details would be released during a news conference later in the day.

Meanwhile, Zakaria al-Agha, a top Fatah official in Gaza, told AFP that President Mahmoud Abbas of the Fatah-led Palestinian Authority (PA) would visit the coastal enclave in “less than a month,” for the first time since 2007.

In a phone interview with AFP, Abbas welcomed the deal and called it a “final agreement” to end the division.

“I received a detailed report from the Fatah delegation about what was agreed and I considered it the final agreement to end the division,” he said, adding that he gave orders to Fatah delegates to sign the deal immediately.

Rival Palestinian factions Hamas and Fatah kicked off three days of unity talks in the Egyptian capital, Cairo, on Tuesday amid high hopes that the negotiations would result in a long-awaited national reconciliation.

Officials from both Palestinian factions praised the meetings yesterday as positive.

The Palestinian leadership has been divided between Fatah and Hamas since 2006, when the latter scored a landslide victory in parliamentary elections in the Gaza Strip. Hamas has ever since been running the coastal enclave, while Fatah has been based in the autonomous parts the Israeli-occupied West Bank.

Previous reconciliation attempts by the two sides to form a power-sharing unity government in Gaza and the West Bank have failed.

In September, however, Hamas said it had accepted key reconciliation conditions offered by Abbas and underlined its “desire to achieve national unity.”

The resistance movement also invited the Palestinian unity government formed in 2014 to return to Gaza, dissolving an administrative committee that runs the Israeli-besieged territory to pave the way for fresh national elections.

The new round of talks came a week after Prime Minister Rami Hamdallah of the Palestinian Authority, dominated by Fatah, visited the Gaza Strip to start the process of transferring the enclave’s governance from Hamas to a national consensus government.

The Cairo negotiations are taking place within the framework of a 2011 agreement between the two sides, under which 3,000 Fatah security officers would join a Gaza police force over the course of a year.

Under that deal, Hamas’ 25,000-strong armed wing, Ezzedine al-Qassam, which has defended Gaza against three deadly Israeli wars over the past decade, would maintain its position.

The resistance group has said the force is non-negotiable.

Tags: Hamas Palestinian
Short Link rasanews.ir/201of2
Share
0
Please type in your comments in English.
The comments that contain insults or libel to individuals, ethnicities, or contradictions with the laws of the country and religious teachings will not be disclosed