Rasa - As US President Donald Trump is expected to announce a more aggressive approach against the historic deal between Iran and the P5+1 group of countries, many experts from within and outside the administration believe that fully abandoning the Joint Comprehensive Plan of Action (JCPOA) now would only make the situation worse for Washington. 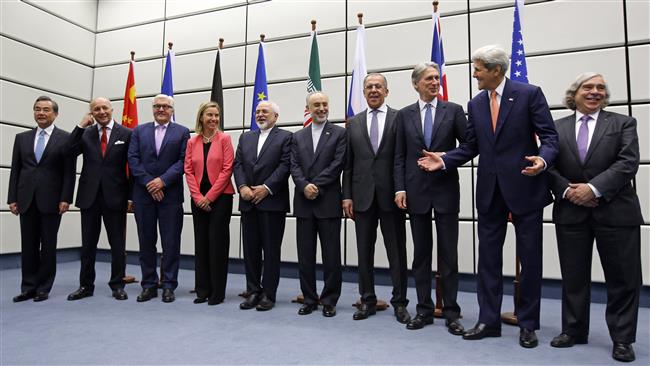 RNA - In an opinion piece published on The Hill on Wednesday, analyst Daniel Depetris says that despite Trump’s long-held desire to delegitimize the nuclear deal, maintaining the JCPOA is still in the US national security interest.

He believes that the president will finally accept the arguments from his national security team that abandoning the JCPOA would only make the situation worse by removing the one mechanism that has given the international community unprecedented access to Tehran's nuclear facilities.

He argues that Trump's refusal to certify the deal -- due shortly in mid-October -- would not have any immediate effects and only place the onus on Congress to decide what to do next about the agreement and "there are a number of lawmakers who would love to kill the JCPOA." Depetris believes that the president will finally accept the arguments from his national security team that abandoning the JCPOA would only make the situation worse by removing the one mechanism that has given the international community unprecedented access to Tehran's nuclear facilities.

Although these certifications are not required by the deal itself, which stipulates the International Atomic Energy Agency is responsible for verifying Tehran’s compliance, the Congress passed the Iran Nuclear Agreement Review Act of 2015, which enacts a 60-day congressional review leading up to a vote on whether a re-imposition of nuclear sanctions against the Iranian government is appropriate in case of Trump's failure to certify the deal.

Trump has long despised the deal in part because he perceived it as a legacy of Democratic former President Barack Obama. Since taking office a year after the deal took effect, the Trump administration has twice certified Iranian compliance under the specific American law that Secretary of State Rex Tillerson is now reportedly planning to amend.

Depetris argues that like all arms control agreements, the JCPOA is "an imperfect mechanism with an imperfect inspection regime" but there are at least three main reasons maintaining the accord is still beneficial for the US.

"First and most important, the JCPOA has averted — and continues to avert — a military conflict between the United States and Iran that before the agreement was too close for comfort," he wrote, and mentioned Israeli Prime Minister Benjamin Netanyahu and the Saudis who long had been salivating at the prospect of military confrontation between Washington and Tehran. "The deal was in many ways a win-win situation resulting from a relatively successful diplomatic process. Tehran received partial sanctions relief to begin rebuilding its economy, and the international community received unprecedented access and insight into a nuclear program that was previously limited to a few routine visits."

He added that "all of the alternatives to staying in the nuclear agreement are based on half-baked assumptions," that European governments are interested in a renegotiation but French, British, German, and European Union officials remain highly reluctant to fiddle with a nonproliferation agreement that has been in fact successful. Since the JCPOA is a multinational accord, Washington would be unable to renegotiate aspects of the JCPOA without European support, which is not forthcoming.

"Finally, the JCPOA is working on the merits," he wrote, adding, "Despite the Trump administration’s public statements that the Iranian government is not living up to the spirit of the accord, the IAEA has issued eight reports concluding that Tehran has not violated the agreement.

Moreover, the Trump administration’s own Director of National Intelligence, Defense Secretary Jim Mattis, wouldn’t have publicly recommended the president stick with the agreement if they didn’t believe it were in the US national security interest. "Nor would some of the very same lawmakers who voted against the JCPOA two years prior — Sen. Rand Paul, Sen. Bob Corker, and Rep. Ed Royce — now recommend that the Trump administration continue implementing the JCPOA. Nor would the Chairman of the Joint Chiefs, the commander of the US strategic nuclear arsenal, and the Secretary of State publicly stated that Iran is in technical compliance of the JCPOA."

The opinion piece concluded with a thought-provoking query, "Is the United States better off with the JCPOA and all of its inspection provisions? Or is the US security interest served by withdrawing from the agreement?"

Another article by The Washington Post says the whole idea of certifying the landmark 2015 deal was a plan devised by White House national security adviser H.R. McMaster and other senior advisers “aimed at accommodating Trump’s loathing of the Iran deal as ‘an embarrassment’ without killing it outright. To get Trump, in other words, to compromise.”

“McMaster realized we just cannot come back here next time with a binary option — certify or decertify,” an exercise Congress requires every 90 days, the article quoted a person familiar with the discussion. “He put his team to work on a range of other options, including a decertification option that would involve Congress” and would not immediately break the deal.

McMaster and Tillerson briefed lawmakers on the president's pending decision on Wednesday as part of the administration's final sales pitch to tackle what it views as problematic elements of the nuclear agreement, leaving officials who were briefed with no doubt that he intends to renege the agreement, three officials told NBC News. "The administration specifically wants to renegotiate the sunset clause in the nuclear deal, which has it expiring 10 years after it goes into effect, the provisions on inspections — the United States wants them to be more stringent and to expand access to Iran's military sites — and to curtail Iran's ballistic missile program," two senior administration officials and a person familiar with the ongoing policy discussions said.

In a recent op-ed in The New York Times, Iran's Ambassador to the United Nations Gholamali Khoshroo, elaborated on Trump's false assumptions about the JCPOA, one being the presence of a “sunset clause” in JCPOA, which pertains to Iran being free of inspections or limits on its nuclear program after decade. “While it’s true that some provisions regarding restrictions will expire, crucial aspects of inspections will not."

The New York Times has reported that even Ehud Barak, the former Israeli leader known for his hawkish views on Iran, said "it would be a mistake for Trump to decertify the Iran nuclear deal, both because it would play to Iran’s advantage and because it would scuttle any hope of a negotiation with North Korea." urging the president not to disavow the deal.

“Even if America decides to pull out of it,” Barak said in an interview on Tuesday, “no one will join — not the Chinese, not the Russians, not even the Europeans. It will serve the Iranians.”

"The lessons of a broken deal will not be lost on North Korea’s leader, Kim Jong-un," Barak said. “They will say it makes no sense negotiating with the Americans if they can pull out of a deal that has been signed, unilaterally, after a relatively short time.”

An opinion by The Wall Street Journal argues that abandoning the deal "would be a mistake as it would totally alienate the other countries which negotiated the deal — the Europe, Russia and China — thereby isolating the US.

Slate's Fred Kaplan writes "Trump seems determined to wiggle out of the Iran nuclear deal, but all the rationales that he and his top aides have put forth to justify the move are specious and self-destructive... The reasons his administration has put forth are dishonest and will make us less secure." "This is shamefully dishonest. The Iran nuclear deal was a carefully worded deal; it is what it says it is, and nothing more. Neither directly, indirectly, nor in any other way does it cover, or aspire to cover, anything beyond Iran’s nuclear program—any more than the decades of nuclear arms-control treaties with the Soviet Union were meant to cover Moscow’s communist ideology..."

Huffingtonpost’s contributor Ian Reifowitz believes “decertifying Iran deal would only further prove Rex Tillerson right: Trump is a moron," describing the decision "in a few words, monumentally stupid, self-serving, and fundamentally shallow in nature, and, at the same time, of grave importance."

Tags: Iran JCPOA
Short Link rasanews.ir/201of1
Share
0
Please type in your comments in English.
The comments that contain insults or libel to individuals, ethnicities, or contradictions with the laws of the country and religious teachings will not be disclosed