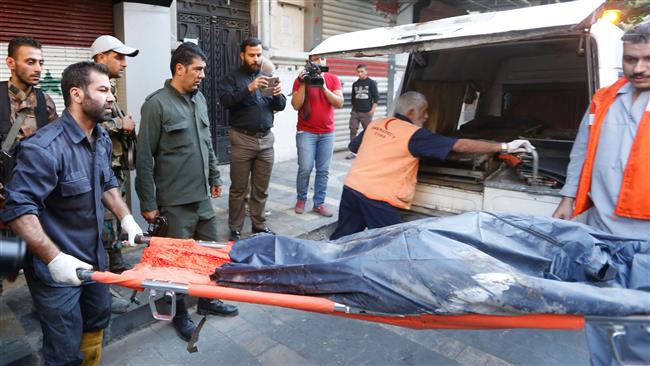 RNA - The bombings took place on Wednesday, when three terrorists blew themselves up near the main police headquarters building on Khalid Bin al-Walid Street in central Damascus.

"The terrorist suicide attackers tried to storm the police command headquarters... The guards opened fire on them, forcing them to blow themselves up before they entered the building and achieved their goals," the ministry said in a statement carried by state media.

Two of the suicide bombers detonated their explosives in front of the police HQ, while the third one was forced to blow himself up after police encircled him behind the building.

Two children were among the injured, the ministry said in the statement.

A policeman lost his life while trying to stop the bombers, according to Damascus Police Chief Mohammed Khairu Ismail.

"One of our forces grabbed one of the suicide bombers and prevented him from entering the building, so he blew himself up, killing the sergeant," Ismail said, noting that investigations were ongoing to see “where they (the attackers) came from and how.”

The Daesh terrorist group claimed responsibility for the attack.

Wednesday's incident was the second terrorist attack over the past month to hit police in the Syrian capital, which has often been shielded from foreign-backed terrorists wreaking havoc across the Arab country since March 2011.

Earlier this month, a group of militants carried out a similar bombing attack against another police station in Damascus’ southern district of al-Midan, killing at least 15 people.

Daesh claimed the attack, saying three of its militants armed with guns, grenades and explosives had targeted the station.

The al-Midan police department had earlier been targeted in December 2016, when a seven-year-old girl entered the building wearing an explosive belt that was remotely detonated.

Terrorist groups have been mostly removed from the territories they once controlled in the capital but still maintain a presence in a handful of positions like the Jobar neighborhood.

They are also in control of the Eastern Ghouta region outside Damascus, using the position to launch rockets into the capital.

The attacks have been viewed as the death throes of the terrorists, who have suffered crushing defeats on various fronts against the Syrian government forces.

Tags: Damascus Syria Bomb
Short Link rasanews.ir/201oem
Share
0
Please type in your comments in English.
The comments that contain insults or libel to individuals, ethnicities, or contradictions with the laws of the country and religious teachings will not be disclosed