US allows terrorists to freely move about near Syria base

Rasa - Russia says the US is allowing Daesh to operate “under its nose” in Syria, calling on Washington to explain why terrorists enjoy freedom of movement in a border area where the Americans have a military base. 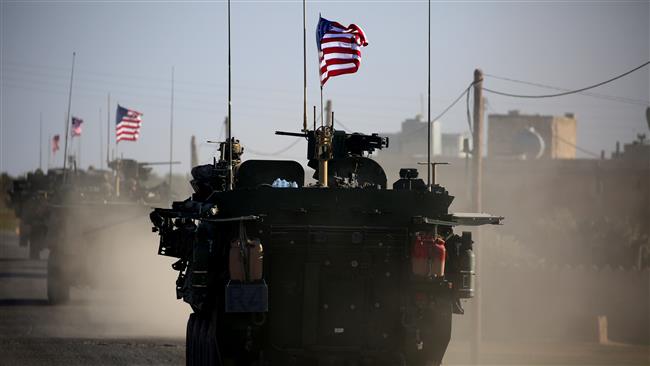 RNA - The US has declared an expanse stretching 55 kilometers (34 miles) around the al-Tanf area a “de-confliction zone,” only letting in forces allied to Washington and blocking out the Syrian army. Tanf is located in a zone, where Syria, Iraq and Jordan’s borders meet, and is, hence, of paramount strategic importance.

Russia’s Defense Ministry questioned how around 300 Daesh terrorists had been allowed to cross the area under US forces’ watch and move out to block an important road linking the Syrian capital, Damascus, and the northeastern city of Dayr al-Zawr, Russia’s Sputnik news agency reported on Wednesday.

It said the road targeted by Daesh is used for delivering humanitarian aid for civilians and supplies for the Syrian army. It urged “the US side to explain its selective blindness regarding militants” operating near US forces in Syria.

Dayr al-Zawr is the capital of a province of the same name. The province is one of Daesh’s last major strongholds in Syria, and is, thus, the subject of counter-terrorism operations by the Syrian army, backed by Russian air power.

The US has long been accused of colluding with Daesh to provide safe passage and logistic support to the members of the Takfiri group in conflict zones. Reports revealed last month that the US military had several times airlifted Daesh Takfiri terrorists amid Syrian army advances on Dayr al-Zawr.

Meanwhile, Ministry spokesman Major General Igor Konashenkov cited another incident, in which terrorists -- whom he did not identify by affiliation -- had used the US-controlled zone to enter a sensitive area nearby.

On October 2 and 3, a group of 600 terrorists, who had previously been based at the Rukban refugee camp, located in the American-controlled area, headed westward in SUVs, and after covering some 300 kilometers (186 miles), entered a nearby “de-escalation” zone.

The “de-escalation” zone is one of the four such demarcations, which have been set out during talks between the Syrian government and opposition, under the auspices of Russia, Iran and Turkey.

Konashenkov said the entry of the terrorists into the zone could undermine de-escalation efforts there.

“Considering such significant reinforcement in terms of manpower, medicines, and food, at the US' tacit approval, one does not have to be an expert to forecast an attempt to derail the truce in the southern de-escalation zone," he said.

“By another strange coincidence, almost simultaneously with them, two convoys [30 and 60 tons respectively] with medicines and products for the local population entered this de-escalation zone… All humanitarian aid that arrived and, above all, medicines, was unloaded and is under control of the militants who came from al-Tanf,” the spokesman noted.

He added that the areas trespassed by the terrorists are under the control of “sleeper cells” belonging to Jabhat Tahrir al-Sham, formerly known as al-Nusra Front or al-Qaeda’s Syria offshoot.

Konashenkov said the 600 terrorists are, therefore, assumed to have entered the areas to either “fight these cells for medicines and food, or act jointly with them,” Sputnik cited him as saying.

The spokesman underscored that “the US would solely bear all the responsibility for sabotaging the peace process in Syria,” he added, according to the agency.

It quoted Director of the North America Department at the Russian Foreign Ministry, Georgiy Borisenko as saying that the US actions near al-Tanf gave rise to the speculation that it was trying to divide the country by creating governing bodies controlled by Washington and its allies.

“Of course, we have a lot of questions about what the Americans are doing in Syria. Unlike the Russian forces, they are there in violation of international law,” he said.

Last week, Konashenkov said the US is using the refugees living in the Rukban desert camp as human shields to protect its military base in al-Tanf.

He said the areas around the Tanf base has turned into a “black hole” used by Daesh terrorists to carry out attacks against Syrian troops and civilians.

Tags: US Syria Russia
Short Link rasanews.ir/201oef
Share
0
Please type in your comments in English.
The comments that contain insults or libel to individuals, ethnicities, or contradictions with the laws of the country and religious teachings will not be disclosed