Abadi says Daesh to be completely defeated in Iraq this year

Rasa - Iraqi Prime Minister Haider al-Abadi says the Daesh Takfiri terrorists group will be totally defeated in the Arab country until the end of the current year. 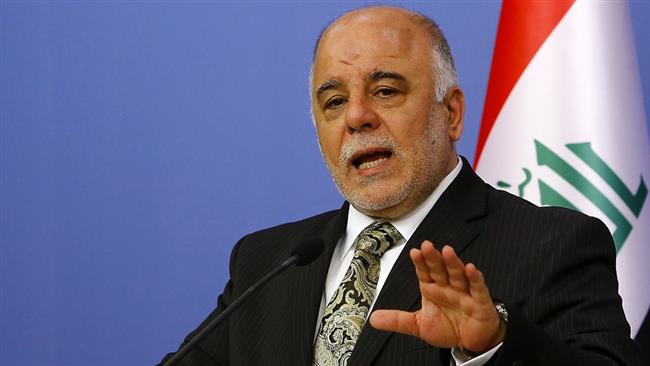 RNA - The Iraqi prime minister made the remark in a televised speech on Tuesday, five days after Iraqi army forces, backed by allied fighters from the Popular Mobilization Units, liberated the strategic town of Hawijah from the grips of Daesh after more than two weeks of fierce battle.

The recapture put an end to Daesh's presence in northern Iraq and left the terror group in control of a stretch of land skirting the western border with Syria, including the town of al-Qaim. Abadi, at the time, described the latest gain as a “victory not just of Iraq but of the whole world.”

Hawijah lies between the two major routes north from Baghdad, to the second city Mosul, and to Kirkuk City and the semi-autonomous Kurdish region.

The most decisive blow to Daesh, however, came in July, when Iraqi forces liberated the northern city of Mosul, used to be Daesh’s de facto capital in the Arab country, after being under the control of the terror group for the previous three years. The battle for recapturing Daesh’s last urban bastion lasted for nine months.

Earlier in the day, the Iraqi army announced that the air force warplanes had conducted precision airstrikes against Daesh positions in a road linking the small town of Akashat to the militant-held town of al-Qaim, located nearly 400 kilometers northwest of the capital Baghdad, killing at least 17 terrorists.

The Takfiri terrorists swept through parts of northern and western Iraq in June 2014. The terrorists then began a reign of terror across the captured areas, committing crimes against all ethnic and religious communities in Iraq, including Shias, Sunnis, Kurds, Christians and others.

Tags: DAESH Iraq
Short Link rasanews.ir/201oeZ
Share
0
Please type in your comments in English.
The comments that contain insults or libel to individuals, ethnicities, or contradictions with the laws of the country and religious teachings will not be disclosed